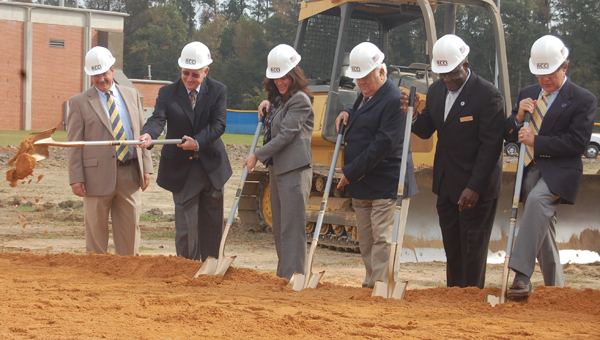 School system and school board officials toss some dirt for the official groundbreaking for the new W.S. Neal High School in East Brewton.

W.S. Neal High School has withstood storms and hurricanes — not to mention the daily drumbeat of teenage feet — but Principal Patty Frazier said she is looking forward to a new school next year.

Escambia County School Board members and school system officials officially broke ground for the new W.S. Neal High School Thursday morning, pushing gleaming shovels into the dirt even as construction vehicles were hard at work behind them.

he $15 million project will be in two phases. The first will see construction of an 81,000 square foot replacement building with new classrooms, a shop, band hall and gymnasium, said Superintendent Randall Little.

A new band practice field will be behind the new building, which will be located on the old football field. The “new gym,” as the existing building next to the current football field is called, will be connected to the new facility.

Phase 1 is expected to be completed in December 2014, which would give teachers the Christmas holiday to move into new classrooms. Rod Cook Construction is in charge of the project, with Creamer Dozier currently doing foundation work.

“Because we’ve had perfect weather, they may finish the foundation in about four weeks,” Little said. “They’ve been working long hours.”

In phase 2, the older buildings will be torn down, with the exception of the existing cafeteria, which will be renovated into an athletic complex, Little said.

The auditorium will be renovated, at a cost of $900,000, and the science labs, which were built in 1997, will become a girls’ athletic facility.

The older renovated buildings won’t be physically connected to the new main building, but covered walkways will join the entire high school. While construction is going on, all home basketball games this season will take place at W.S. Neal Middle School. In Brewton, T.R. Miller is also undergoing a construction project, with new classrooms expected to be open in time for the fall 2014 semester.