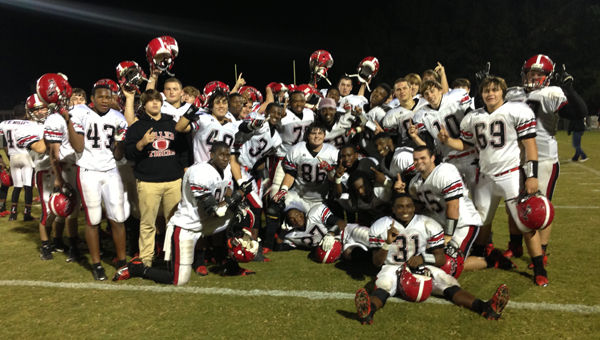 SWEET WATER — In a game between two tradition-rich, top-10 teams, the T.R. Miller Tigers prevailed over the Sweet Water Bulldogs with a 27-6 win on Victory Field at Nolan Atkins Stadium.

With the win, the No. 2-ranked Tigers of Brewton capped off a perfect 10-0 regular season while the No. 6-ranked 2A Bulldogs fell to 7-3.

The 2013 Tigers became the ninth T.R. Miller team of 88 to earn a perfect regular season.

T.R. Miller led Sweet Water 6-0 after one quarter of play and 13-0 at the half. The Tigers built a 20-0 lead after three quarters of play before the Bulldogs scored seconds into the fourth quarter to cut T.R. Miller’s lead to 20-6 with 11:51 left in the game.

T.R. Millers’s Kameron Coleman put the game away with a 28-yard touchdown with 7:38 left in the game to give the Tigers the 21-point win.

“It was a great win over a really tough football team on the road,” Tiger head coach Jamie Riggs said. “I thought we bowed up and got tough tonight. We didn’t do everything right all the time. We made some big plays when we needed to. I am really proud of our defense. I thought that we never really gave (Sweet Water standout Jakoby) Aldridge the real big play. I thought we did a really good job of containing him for most of the night.”

Dominique Jackson had T.R. Miller’s first score of the game on a 5-yard run.

Quarterback Kieon Snith hooked up with Jackson for an 11-yard touchdown to put TRM up 13-0.

In the third quarter, Micah McKinney recovered a Bulldog fumble in the end zone to put TRM up 20-0.

TRM had 297 total yards of offense in the win whole Sweet Water had 223.

Smith was 3-for-4 passing with one interception.

Riggs said he was happy about his team’s unblemished regular season record, but he was looking towards the playoffs.

“It has only been nine teams to do it,” Riggs said. “That is pretty special, you know. Now it is time for another season.”

T.R. Miller will host American Christian next week in the first round of the playoffs, while Sweet Water will host Goshen.