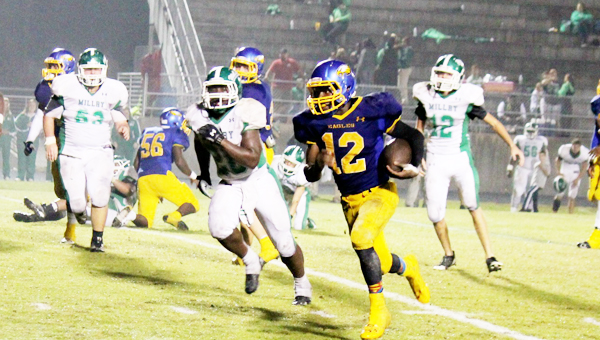 The W.S. Neal Eagles ended their season with a big win at home against Millry Friday night, outscoring the Wildcats 42-12.

The Eagles scored quickly on the first drive of the game, jumping to a 7-0 lead with just a minute and a half off the clock. Millry answered with a 10-play drive that ended in a touchdown, but Neal was able to block the PAT and keep the lead 7-6. Neal scored another touchdown in the second quarter, taking a 14-6 lead into halftime.

Millry was able to get across the goal line once more, in the opening seconds of the third quarter to lessen Neal’s lead to only 14-12. This would be the Wildcats’ last score of the night.

The Eagles managed to move the football across the goal line twice in the third quarter and twice in the fourth quarter to round out the final score.

The Eagles also snagged three interceptions during the game, one each for Michael Williams, Tyanthony Alexander, and Miles Powell.

“We had a lot of adversity this year, but it’s nice to finish with a win,” head coach Dough Hoehn said. “The last three or four games we were kind of thinking, ‘Who’s going to go down next?’ so this gives us some momentum going into winter workouts. I’m glad they got this win. Injuries are a part of football, but I thought our kids handled it well. I’m glad the seniors got this last win. I’m happy for the students, the band, the cheerleaders, and the community that has come out and supported us strongly this year. That means a lot to the kids, it really does. Our kids really appreciate that.”