Gas below $3 in Brewton 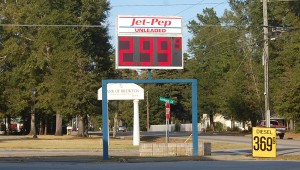 The cost of a gallon of gasoline has slipped below $3 in Brewton — a psychological milestone for consumers, say experts.

At least one local gas station was selling gas a $2.99 a gallon Tuesday.

Analysts with GasBuddy.com say breaking the $3 barrier is a boost for motorists and consumers.

“Gas prices across many communities are now the lowest since they’ve been since the Libryan crisis in February of 2011. Nearly 15 percent of all stations in the U.S. are now selling gasoline under the psychologically important $3/gal level,” said GasBuddy.com senior petroleum analyst Patrick DeHaan. “Last year on this date saw just 1 percent of stations selling under that level, so motorists aren’t doing too shabby. States that saw the largest declines last week were Montana, Ohio, and Indiana, all where prices declined at least 15 cents per gallon. Several stations in Tulsa, Oklahoma, which features the cheapest gas in the U.S. are selling at a mere $2.45/gallon, a number so low that had you said that just six weeks ago, motorists would have been shaking their heads in disbelief. Prices nationally could drop to as little as $3.05 a gallon by Christmas.”