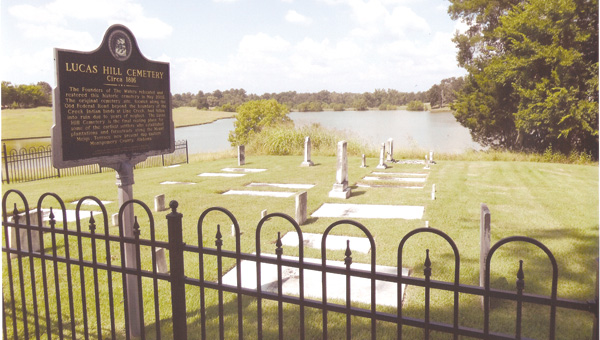 This is a model for what Franklin Cemetery might look like after remains are transferred from the GP campus to Union Cemetery.

That is how one descendant of those buried in a cemetery hidden amid industrial buildings at Georgia Pacific’s Brewton campus described the state of those grave sites, which GP hopes to move to Union Cemetery perhaps by early next year.

Attorney Helen Kathryn Downs, representing GP, said all but one of the 25 descendants GP officials have spoken with are in favor of moving the remains of their loved ones to a new location.

“If this process goes forward,” Downs told county commissioners Tuesday, “families will have much easier access to the gravesites. And they will have peace of mind that their loved ones will be treated with respect and that the graves will receive perpetual care.”

The City of Brewton has already approved the move.

If the historical commission approves a permit for the project, the moving of the remains will be overseen by archeologists from the University of Alabama who have already been involved in several such projects.

The topsoil will be carefully removed, and each gravesite identified and mapped.

“Every family group will be kept together,” said Downs, who noted that there are four main families with loved ones buried there.

Then, archeologists will carefully excavate each individual grave and move the remains to Union Cemetery, where they will be re-interred. A fence and historic marker will be erected to set the graves aside from the others at the cemetery.

Commissioner Larry White, whose district includes Franklin Cemetery and GP, said he appreciated the efforts of the company to contact descendants.

“It appears the overwhelming majority support this project, and it is in the best interest of the descendants.”