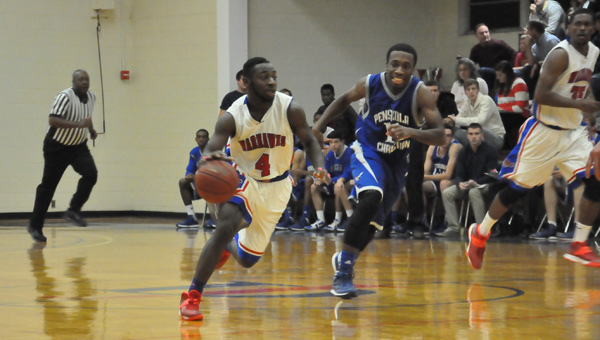 Chris Oden had 24 points for JDCC in their loss to PCC Tuesday night.

Despite a 24-point night from Chris Oden, the Jefferson Davis Community College Warhawk basketball team suffered their first loss of the season Tuesday night at home to Pensacola Christian College.
The Warhawks led the Eagles of PCC 33-27 with 5:04 left to play before halftime before going scoreless and seeing PCC end the half on a 7-0 run to take the one-point halftime lead—34-33.
In the second half, JDCC was outscored 55-32 to take the loss by 24 points.
With JDCC up 35-34 early in the second half at the 19:37 mark, PCC went on a 9-0 run to take a 43-35 lead. PCC then added another 9-0 run to take a 52-38 lead with 12:12 left in the game.
JDCC never recovered as PCC build a 20-point lead, 69-49, with 7:53 left in the game.
JDCC cut PCC’s lead to 13 points, 69-56, with 6:12 left in the game, but PCC went on to outscore JDCC from that point on 20-9 to seal the win.
“We just didn’t give off a good enough effort tonight to get the win,” JDCC head coach Allen Gainer said. “We just didn’t a good enough effort to win in any phase of the game. Chris is always consistently what we need him to be. We just have to get everyone on the same page with him. We have to give a better effort. Like I told them (after the game), we cannot beat anyone on our schedule with the effort that we gave tonight. We are only down 14 with five minutes to go and we are looking at the score like the game is over. With 5:34 to go, we are only down 14. That score looks big at 72-58, but 14 points was doable. We just quit playing. A well-coached team that plays hard, you just can’t do that. But we will get better.”
Along with Oden’s 24 points—10 in the first half and 14 in the second—Anthony Bell finished with nine points and Fletcher Forte, Mikwese Clayboure and Quan Threatt all had eight points each.
Michael Hutchins added five points while Keaynon Gulley chipped in three points.
Hutchins and Darren Wilson both led with five rebounds each. Hutchins led with four defensive rebounds while Wilson led with two offensive rebounds.
Forte led with five assists while Hutchins led with two blocks. Oden led with six steals in the loss.
JDCC had four three-pointers in the first half and five in the second for a total of nine in the loss while PCC had nine as well with five in the first half and four in the second.
The Warhawks were 6-of-8 from the free throw line, going 1-for-1 in the first half and 5-for-7 in the second.
The Eagles of PCC shot 10-for-15 in the win with a 1-for-2 showing in the first half and 9-for-13 in the second.
PCC’s Mike Goetsch led in the win over JDCC with a game high 25 points.
JDCC shot 41 percent from the field and 32.1 percent from the 3-point area.
JDCC, now 1-1 overall, will be back in action Monday, Nov. 18, at Lawson State. Game time is set for 6:30 p.m. The game will be the first of four straight road games for the Warhawks who will not return back home until Saturday, Dec. 7, against Marion Military. Game time for the game against Marion Military is set for 2 p.m.
JDCC’s game against Southern Union—that was scheduled for this past Saturday, Nov. 9, and had to be postponed—has been rescheduled for Saturday, Jan. 11, at 3 p.m. at Southern Union.
The game was cancelled following the death of JDCC head coach Allen Gainer’s father.
JDCC will play on three game in the month of December with two of them being home games against Marion Military and Southern Union. The game with Southern Union will be Thursday, Dec. 13, at 5:30 p.m. The lone away game is set for Tuesday, Dec. 3, at Spring Hill College. Game time is set for 5 p.m. in Mobile.
Following the three games in December, the Warhawks of JDCC will be back in action on Saturday, January 4, on the road at Marion Military. Game time is set for 3:30 p.m.
JDCC’s first home game of 2014 will be on Thursday, Jan. 9, against Bishop State. Game time is set for 7 p.m. and will be the first conference game of the season for the Warhawks.
The conference game with Bishop State will be the first of 14 straight conference games for the Warhawks.