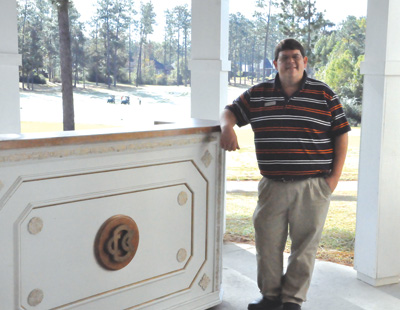 Adam Manasco is the new food and service manager at the Country Club of Brewton. While the 42-year old has served in a lot of jobs over his years, he is now back home in Brewton and looking to bring some new experiences to the Country Club and the area.

Manasco, who began working in food services as a teenager making dough at Pizza Hut in Brewton, said his love of cooking began with his family.

“When I was young, my mom was single so it was just her and my sister and myself,” he said. “I was always over at my grandmother’s house a lot and she was always cooking dinner. I was in the kitchen a lot helping out. It just something I enjoyed to do and I was pretty good at it at a young age. I just kept progressing and progressing. My family, especially my great grandmother, are all good cooks. The only recipe I didn’t get from her that I would have liked was her biscuits. They would just melt in your mouth, so I was just pushed that way. The whole time I was in college, I was just cooking in different spots and loved it. I still love it and have a great passion for it. I love to take care of people and love to create food that makes people happy.”

Manasco’s career took him from the Pizza Hut in Brewton at age 16 to a variety of food jobs across the country — including Orange Beach, Missouri, Birmingham, Orlando and Miami. He has worked at several restaurants in Brewton, and earned his culinary degree in Gulf Shores, with many stops along the way before returning to his hometown.

Manasco spent nine years with Fleming’s Prime Steakhouse, working in its Orlando, Miami, Sarasota and Birmingham locations before moving back to Brewton.

“My mom was here in Brewton taking care of my grandparents, and my daughter was growing up so fast in the Hoover school district so we moved back home to help the family out,” he said. “I worked at a few different places and nothing was really working out. I worked at Bank Shot before it closed then went to the Alabama Wing House in Atmore. A friend of mine called that I used to work with and asked about a job opening up at the Country Club of Brewton as the food and beverage manager. I told him he was from Mobile and would not like the small town because he was in the big city. He agreed with me and after we hung up, I called Don (Beardsley at the CCB) and asked if I could talk with him. … I have now been here six weeks.”

Manasco said his job at Flemings taught him a lot about his current position.

“Really, I feel it is more of dining experience,” he said. “It is not just the food, but the service and the atmosphere. Smiles are contagious and servers being friendly and knowledgeable. I learned a lot from Flemings about how to take care of people and whatever it takes attitude and to do whatever it takes to make them happy. The customers are paying a good bit of money and you don’t want them to not be happy. It always makes you feel good when people say they had a good experience and they enjoyed the food. Those long days don’t seem quite as long when you make people happy. It is what drives me to work 17 or 18 hours and get up bright and early and get after it again.”

Another thing his job at Flemings taught him was about wine—something he wants to bring more of the Country Club.

“Using my knowledge from Flemings who had 100 wines by the glass and 100 wines from the bottle, I have a lot of wine knowledge,” he said. “I learned to prepare foods in wine and we are starting to get ready to do some wine tasting and dinners. We want to have one once a quarter. I think it will be really enjoyable and will teach people some new things about wine. I enjoy giving people knowledge and helping them enjoy and learn about their food instead of just eating it. There is a reason why we match different foods together. We have brought in a lot of wines, some that are a step above what we usually have around here. Hopefully it will bring a lot of people to the Club of have not had the experience of tasting good food and wine and good service, which around Brewton is something left to be desired. Meeting the expectations of people when they come in is hard to do sometimes, but we are really making strides of being better. As chefs we are driven to make foods that make happiness.”

Manasco is married to his wife Stephanie and has three stepchildren, Derrick, Maria and Celina.