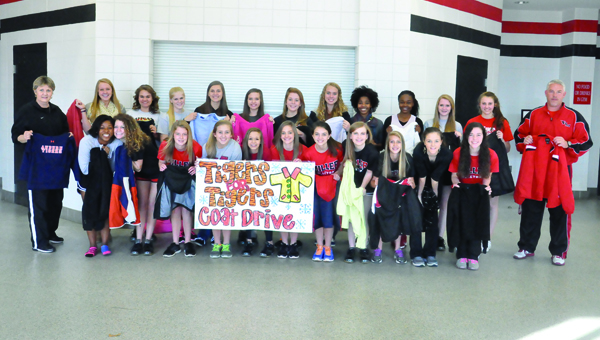 For the second straight year, the T.R. Miller volleyball and softball teams teamed up for the second annual “Tigers For Tigers” coat drive at the T.R. Miller gymnasium Thursday.
The teams collected coats from 7:30 to 8 a.m. and from 3 to 4 p.m. Thursday for those who were without.
The idea came from Lady Tiger head softball and volleyball coach Greg White one morning while he was doing morning duty at Brewton Elementary School. White said the name of the coat drive—Tigers For Tigers—was brought up with the intention of having the older tigers give to younger tigers.
“We had done the Habitat project the last three or four years and we enjoy doing those type of projects, but I wanted to do one that we could call our own and try to start a tradition with it,” White said. “I threw several ideas around but the kicker for me was I had morning duty about three weeks ago and it was that first cold snap. I was outside directing traffic and it was her and her sister. The younger sister had a jacket on and the other one didn’t. I was just kidding with her and I told her that she needed to put her jacket on. She told me ‘I ain’t got one’ so that really hit home to me.”
After seeing that, White decided that was what he and his teams needed to do. So he pitched the idea to his teams and the rest is history.
As for the 2013 drive, White said things went well.
“The juniors and seniors came this morning and we had almost 40 jackets this morning,” White said Thursday afternoon. “The freshman and sophomores had some brought in this afternoon, plus whatever drive-ups we get. We had over 100 last year. Our goal was to get at least that much again this year. We were almost halfway there this morning. Hopefully we can continue to get some to get us close to that amount again.”
Jackets raised in the drive would primarily go to middle school and elementary kids, White said.
“All the teachers at the elementary school and the middle school have been given information and if the teachers think a student can benefit from this, they contact the school counselor and it kind of goes from there,” he said. “It is open to whomever needs it.”