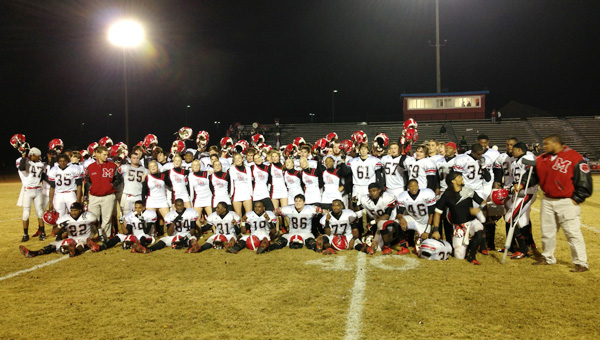 T.R. Miller players and cheerleaders celebrate on the field after the game.

MIDFIELD—For the first time since 2008, the T.R. Miller Tigers are heading to the quarterfinal round of the class 3A state playoffs.

“Well, I was proud of us,” TRM head coach Jamie Riggs said. “This isn’t the typical type of game we usually play. We made a lot of mistakes. But we just kept playing hard all the time. Right before halftime we scored two touchdowns and I thought that was the difference in the game. We got some turnovers and turned those in to points.”

After failing to convert on their first few offensive plays and falling behind 6-0 with 1:46 left in the first quarter, TRM scored 41 unanswered points to get the 35-point win.

TRM led Midfield 7-6 after one quarter of play and 28-6 at the half after scoring 21 points in the second quarter.

Neither team scored in the third quarter, but the Tigers scored 13 points in the fourth to get the big win.

TRM had 380 yards of total offense in the win while Midfield had 169.

The Tiger defense finished with six turnovers in the win including four interceptions and two fumbles.

“I am really proud of the defense,” Riggs said.

With the win, TRM improved to 12-0 this season. The Tigers will travel to Leeds next week after the Green Wave defeated Fayette County Friday night 30-0.