Could Brewton get bowling alley? 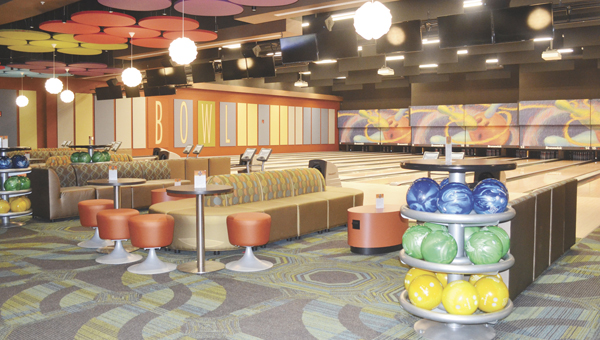 Connie Baggett has done the math.

To get a bowling alley in Brewton — when equipment for one lane can cost as much as $45,000 — would cost every man, woman and child in Brewton $400 each to construct.

“And then every single person would have to commit to going several times a week” to keep it open, she said.

As director of program management for the City of Brewton, Baggett has been charged with finding new opportunities for recreation in the city.

Over the past several months, the city has developed a strategic plan that includes new parks and park renovations, for which the city is actively seeking grant funding. The city council just announced plans to buy land in the Alco area to expand a family park, at a cost of about $15,000 for the land.

Meanwhile, north of Atmore, the Poarch Creek Band of Indians — already in the entertainment business with a massive hotel and casino — just opened a complex that includes a bowling alley, movie theater, arcade and restaurant.

In response, some residents have asked the obvious question: Why doesn’t Brewton have some of those opportunities?

“We don’t need a park expansion, we need something for our children to do,” Cheryl Kennedy Hines wrote on The Brewton Standard’s Facebook page. “A skating rink, a bowling alley, a movie theatre. How can a town complain about local money being spent elsewhere when they give us no reason to stay here. When you take your kids out of town to do these things, guess what else happens — you go out to eat, and sometimes go shopping, too. All that money that could stay in Brewton.”

“I’m 18, and yes I love the parks,” she wrote. “They are nice, but we have so many already and I would love to be able to go out with my friends and stay here in Brewton to bowl, skate, or go to the movies, than have to waste all my gas and money to go to Pace or Pensacola. A skating rink or bowling alley would be so much fun to have here.”

But for city officials, the question isn’t that simple.

Most cities — especially small communities like Brewton — simply cannot afford to make the investment in a bowling alley or movie theater. And, Baggett notes, if the community could support it, a private investor would have already stepped up.

“If money could be made by doing it,” she said, “somebody would be doing it.”

In fact, people with ties to Brewton “looked every which way” they could to determine if such a private enterprise was feasible in the city — and ultimately decided it was not.

Bay Minette does have a bowling alley but did not have to start from scratch — the city in 2005 was deeded an existing facility — an old grocery store — which it converted into a recreation center with bowling and other activities.

Until this past summer, Bay Minette actually leased its bowling alley to a private operator, but the city is now managing the operation. The bowling alley shares its facility with a skating rink that is also used for other recreation activities.

“We’re still in the evaluation phase, seeing how it is operating,” he said. “We’re going to do our best to keep it open, we’re just determining how best to operate it efficiently.”

In the past year, Brewton has been deeded land to expand Burnt Corn Creek Park, and officials have been applying for grant money to fund new activities there — including expanding a pond for paddle boats and building a zip line course in the woods.

The land donated for the park can’t be used for anything else because it sits in a floodway, Baggett said.

Using the land for parks gives the city a chance to provide activities for residents — and attract visitors who will use the parks for ecotourism.