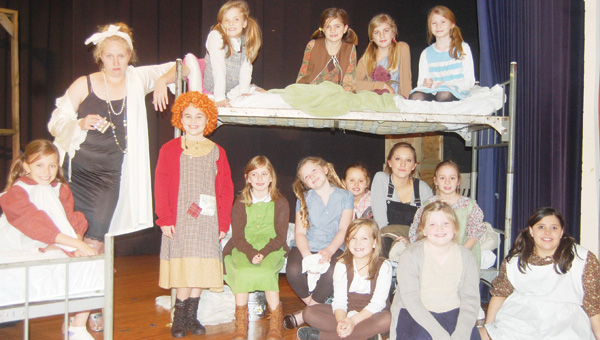 As a dress rehearsal stretched late into the evening Monday, the cast of Brewton Community Theater’s “Annie” marched across the stage, belted out songs and learned a few tricks of the trade.

And never once did their enthusiasm for the play seem to falter.

“Annie” will be performed at 7 p.m. Friday and Saturday at the W.S. Neal High School Auditorium. Tickets are $10 each and are available from cast members before the show or at the door each night.

“I’m excited,” said director Stephen Billy. “Everyone has worked so hard. The reward is the end.”

Caroline Williamson plays Annie, in a bright red wig and with the same spunk you’d expect from the iconic character. Courtney Ladnier, a friend of Billy’s from Montevallo University, is commuting from Baldwin County to play Miss Hannigan, and Billy’s own father, Steve Billy, is Daddy Warbucks. T.R. Miller graduate Emily Isaacs is Grace.

A group of energetic young girls play the orphans, and a mix of youth and adults play a variety of roles.

“Everyone is there for the right reasons,” Billy said.

“Everyone is eager and excited about the opening.”

Billy said the group chose “Annie” because it was a popular, well-known show — and working with a young cast has kept things interesting.

“I love working with kids,” he said. “They keep you on your toes.”

Billy worked on several theater projects at Montevallo, from which he graduated last spring, and plans to attend graduate school next year for theater management.

After watching from the balcony of the theater Monday night — and offering some new notes and directions to his actors — Billy said he was pleased with what he saw in the first dress rehearsal.

“It’s time to have an audience,” he said.