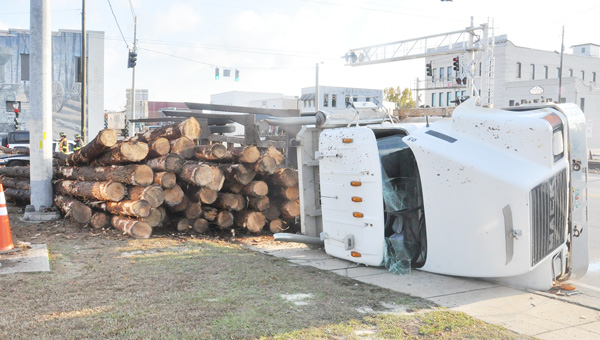 Log trucks have spilled their loads turning left from Alabama 41 onto U.S. 31 South at least eight times in the last three years, hitting almost the exact same spot every time as they make the turn.

After yet another wreck last Wednesday, Brewton Police Chief Monte McGougin said he and Mayor Yank Lovelace have asked the state to review the intersection again to see if something could be done.

Each accident takes time and manpower away from the police department, McGougin said, not to mention tying up traffic.

“It takes about three and a half hours to clear the scene,” he said. “It takes an extreme amount of manpower.”

The Alabama Department of Transportation changed the intersection with new curbing and rerouted large buses and trucks turning right from U.S. 31 to U.S. 29. Those trucks now use Persimmon Street when turning right.

McGougin said he wondered if a new truck route coming the other way or changing the grade of the intersection would help.

Lovelace said the city has asked engineers to look at the problem. Last month, ALDOT officials said there were no changes scheduled for that intersection, although the state is putting new crossing arms at the McLellan Street and Sowell Road railroad crossing.

McGougin said after last week’s wreck, ALDOT officials seemed receptive to looking at a new solution for the area.

No one has been injured in the log truck wrecks over the past several years, but that particular railroad crossing in general has been the most dangerous in Brewton, according to federal records.

ALDOT officials did not respond by press time Tuesday.