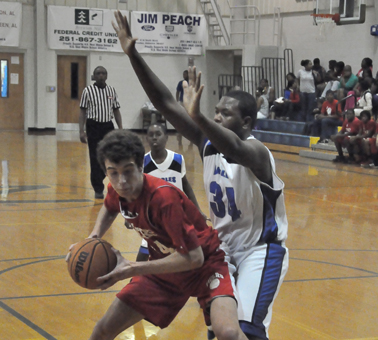 The Brewton Middle School and W.S. Neal Middle School basketball teams faced off against each other Thursday in East Brewton and came away with a split.
The Lady Tigers of BMS dominated their game against the Lady Eagles of WSNMS from the start to finish as they cruised to a 42-8 win.
In the boys game, the two teams battled back-and-forth the whole game with WSNMS claiming a 29-24 win over Brewton and getting revenge from their earlier loss to the Tigers in their first game of the season.
With the split in games, the Lady Tigers of BMS improved to 5-2 this year while WSNMS fell to 2-5.
In boys action, Brewton fell to 3-4 while WSNMS improved to 6-1 with their sixth straight win.
Brewton will play their final game of the season Monday at home against Jay. Game time is set for 4 p.m.
W.S. Neal will play their final game of the season Tuesday at home against McCall. Game time is set for 1 p.m.

BMS Lady Tigers 42, WSNMS Lady Eagles 8
The Brewton Middle School Lady Tigers started their game against W.S. Neal on a 14-0 run and ended it with a 12-0 run as they rolled to a 34-point win over the Lady Eagles by a score of 42-8.
Eight Lady Tigers scored in the win with Morgan Longmire leading the way with 10 points. Longmire had eight of her 10 points in the first 3:02 of the game as Brewton led W.S. Neal 14-0 after one quarter of play.
The Lady Eagles finally saw some offense in the second quarter, but was outscored 10-6 in the second to trail Brewton 24-6 at the half.
In the third quarter, the Lady Tigers edged out W.S. Neal 6-2 to carry a 30-8 lead into the final quarter of play. In the fourth, Brewton ended the game on a 12-0 run to seal the win by 34 points.
Along with Longmire’s 10 points, Karmaiya Jenkins and Kyla Bell both finished with eight points each. Shania Elliott chipped in five points and Malyaisa Campbell added four points. Breonna Dees had three points in the win. Jaden Miller and Jakyra Spears both chipped in two points each for the Lady Tigers.
For W.S. Neal, Marisha Fraser led with six points in the loss. Janiyah McCants and Haylee Watson had one point each.
W.S. Neal finished 2-for-11 from the free throw line while Brewton was 1-for-2.

WSNMS Eagle boys 29, BMS Tiger boys 24
Down 20-19 to Brewton with 1:57 left in the third quarter, the W.S. Neal Middle School boys basketball team used a 6-0 run to end the quarter and start the fourth to propel them to a 29-24 win over Brewton for their sixth straight win.
The Eagles of East Brewton started hot in their game against the Tigers as they led 7-0 after one quarter of play. While the first quarter was W.S. Neal’s quarter, the second quarter belonged to the Tigers as they used an 11-0 run to take an 11-7 lead with 1:20 left before the half. Brewton would go on to lead W.S. Neal 11-9 at the halftime break.
In the third quarter, W.S. Neal stormed back as they used an 8-0 run to take a 19-18 lead with 2:12 left in the third quarter. After Brewton claimed their 20-19 lead at the 1:57 mark. W.S. Neal ended the quarter on a 3-0 run to grab a 22-20 lead heading into the fourth.
In the fourth, W.S. Neal outscored Brewton 7-4 to claim the five-point win.
For W.S. Neal, Jacobey Hawthorne led in the win with 10 points. Marvin Maddox added six points while Jordan Hails added five points. P.J. Lovelace chipped in four points in the win while Taylor Fountain and Ricky Samuel both had two points each.
For Brewton, Joshua Jolly led with 12 points. Hayden Atkinson followed with six points while Demonte Jenkins chipped in four points. Michael Campbell added two points in the loss.
W.S. Neal was 8-for-15 from the free throw line in the win while Brewton was 3-for-10.