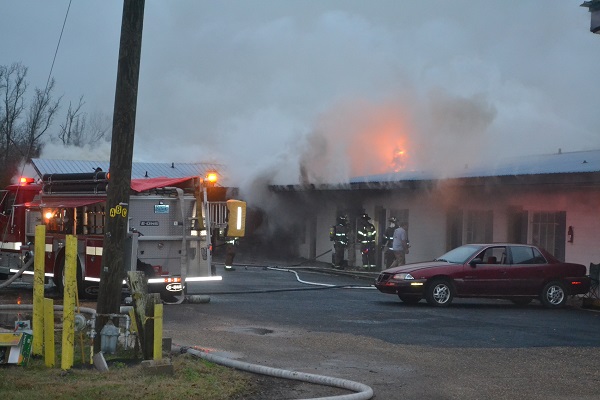 A massive fire engulfed the Southland Motel on U.S. Highway 31 in Atmore on Saturday afternoon.

The flames made their way through many of the structure’s rooms, forcing the hotel’s residents to quickly leave. The cause of the fire was not immediately known, and there were no injuries initially reported.

Firefighters from a variety of local departments responded to the scene, including Atmore, Flomaton, Poarch, Walnut Hill and Nokomis. The Atmore Police Department also reported and held to control traffic around the roads. Most of the east-west Highway 31 traffic was detoured while firefighters battled the strongest part of the flames.

Paula Foreman, of Marion, Ohio, was napping when she woke up to a “room engulfed in smoke.”

“I just got out as fast as I could,” said Foreman, who was visiting her boyfriend in Atmore.

More information about the fire was not immediately available. Photos show firefighters working hard to contain the blaze for hours.