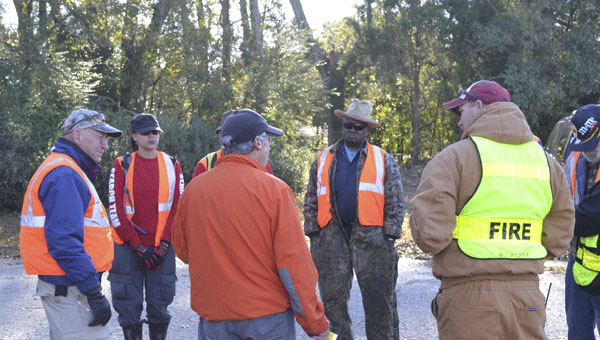 A search party gets instructions before leaving to search for Marcie Brewton Morgan Thursday monring.

A search was held Thursday morning in Canoe, for an Atmore area woman missing for more than two weeks.

The Escambia County Sheriff’s Office teamed up with a KlaasKids Foundation search team, out of Pensacola, to search for 42-year-old Marcie Brewton Morgan.

The group of 65 searchers will cover a five-mile radius around a cell phone tower near Morgan’s house in Canoe. Sheriff’s Office Capt. Bill Blair said the most recent signal from Morgan’s cell phone appeared to have been sent from the Canoe area.

In a previous interview, Richard Morgan said his wife had just completed a doctor’s visit in Mobile when she called a family member from the Saraland Walmart, to say she was on her way home. She has not been seen, or heard from since.

“She placed a call from the Saraland area, but the last time her phone ‘pinged’ a tower, it was in this area,” Blair said. “So, she came home from Saraland.”

Blair said the office has some other leads they will follow once the search is completed.

“We’ll start a new round of interviews,” he said.

Chief Deputy Mike Lambert said crews would be searching Thursday for clues to Morgan’s whereabouts, including the blue 2001 Lincoln Town Car she was reportedly driving at the time of her disappearance.

“At this point in the investigation, we need to clear the area around the house to make sure nothing has been overlooked,” Lambert said.

Brad Dennis, director of KlaasKids, said the group would split up the larger search area into smaller sections and send teams out. The group will use all-terrain vehicles, K-9 units and two airplanes to cover more ground.

“We’ll be looking for anything that can be attributed to her,” Dennis said. “Right now, it’s a process of elimination.”

KlaasKids, named for 12-year-old murder victim, Polly Hannah Klaas, usually searches for children believed to be abducted, but the group has also been involved with some high-profile cases, including the search for Casey Anthony.

“They’re amazing in their willingness to search and organize this search,” said Sheriff Grover Smith. “We can’t thank them enough.”

Lambert said the sheriff’s office had worked with KlaasKids in the past, but he used contacts to help get them involved in this search effort.

“They’re well versed in this and do it all across the country,” Lambert said. “They were willing to help. They never batted an eye.”

Marcie Morgan is described as a white woman, about 5-foot-4, 150 pounds, with a medium build. She has blue eyes, wavy dark brown hair and an olive complexion. She was last seen driving a blue 2001 Lincoln Town Car, with a blue and gray vinyl top and tinted windows.

At this time, authorities do not suspect foul play.