Why persistent rumors about a JDCC merger? 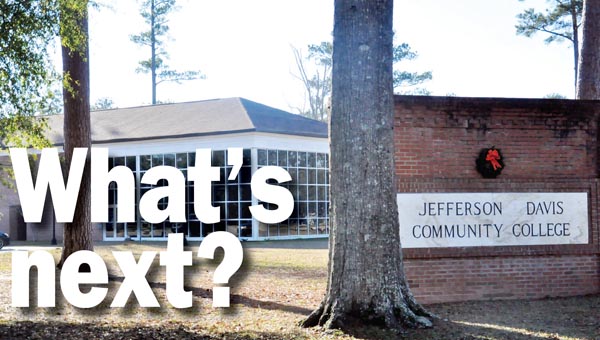 Jefferson Davis Community College has one of the lowest enrollments among state two-year institutions — a fact that might have led to the persistent rumor that the college would one day merge with another community college.

With JDCC’s leadership now in flux — an acting president will become an interim president at the first of the year, leading up to a presidential search — will the idea gain steam?

State school board member Tracy Roberts, who represents Escambia County on the school board, said the idea is not currently being discussed.

But she said that doesn’t necessarily mean it’s off the table.

“We’re always considering best practices and how to be efficient,” Roberts said of the school board. “If we were to merge schools, we would want to look at access, how it affects the economy, the faculty and staff.”

Roberts said simply merging administrative roles at two schools would be the “easiest way” to accomplish a merger.

JDCC was founded in 1964 in Brewton and now has a satellite campus in Atmore. Earlier this year, president Dan Bain was relieved of his duties and replaced by an acting president, Camille Cochran, after an investigation which was not made public.

Cochran will become interim president after Dec. 31, when Bain is off the college payroll.

The college has seen some of its longtime leaders retire in recent years. Longtime finance director Bernie Wall retired last year, and director of personnel Sherry Martin retired in 2012. Dean of instruction Kathleen Hall — who served as interim president before Bain was hired — retired in 2012 as well.

Among other colleges, only Reid State Technical College in Evergreen has a smaller enrollment, at 515 for fall 2013 — the smallest community college enrollment in the state.

Among other nearby schools, Lurleen B. Wallace in Andalusia had an enrollment of 1,570 this fall, with Alabama Southern in Monroeville at 1,366.

The largest enrollment was at Calhoun Community College in north Alabama, with an enrollment of 11,175 this fall.

Community college enrollment as a whole has been declining in recent years after showing an increase in 2010, coinciding with a poor economy.

Community college enrollment typically increases when employment levels go down as people seek to retrain for a new career.

But community colleges themselves have a strong impact on the economy of their communities. A 2011 study commissioned by the Alabama Community College System shows that JDCC had a $42.48 million impact on the Escambia County economy from 2008 to 2010.