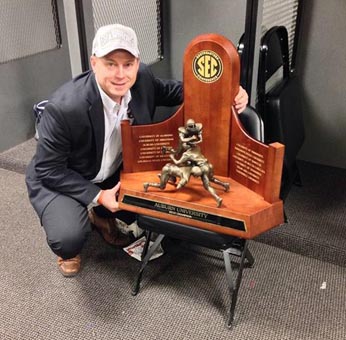 While the Auburn Tigers have accomplished many great things during the 2013 season and will be playing for the National Championship in a few days against Florida State, the team can thank a coach with local ties to the area. East Brewton native and W.S. Neal graduate Scott Fountain is that coach.
One year from going 3-9 overall and 0-8 in the SEC, the Tigers made a quick turnaround under new head coach Gus Malzahn.
“Coach Malzahn has gotten everyone on the same page,” Fountain said. “I am certain that is the number one reason for the quick turnaround. Our players have bought in on his direction.”
After spending the previous four seasons as Auburn’s player personnel director, Fountain returned to the field as the Tigers’ special teams coordinator and tight ends coach in 2013.
Two of Auburn’s biggest wins this season came at home as the Tigers defeated Georgia on a last second deflection and stunned No. 1 Alabama in the Iron Bowl on a returned missed field goal that went 109 yards for the game-winning score.
“The win over Georgia was a great win,” he said. “I felt like we dominated most of the game until the last nine minutes. The play was incredible. Ricardo Louis said he heard the thump of the ball hit the pads of the UGA player and at that point he looked over his shoulder and saw the ball.”
Fountain said the Alabama game was an “incredible finish”.
“My first thought was that’s how the Iron Bowl should be played,” he said. “Incredible experience to be from this state and be a part of what happened that day. After the timeout we made the swap and put our punt returner in and the rest is history. Chris (Davis) made an unbelievable run with some darn good blocking.”
As the special teams coordinator, Fountain said getting the returned field goal win over Alabama was an “incredible” moment.
“It was like, OK he’s caught it now let’s see what happens,” Fountain said. “I love the way he set the field goal unit of Alabama up then worked towards our sideline. After he scored players and fans were jumping on top of him. He was out of breath and we finally got everyone off and then there was a storm of celebration in Jordan Hare Stadium on Pat Dye Field unlike I have ever seen.
“It was an incredible moment, and incredible victory, and an awesome experience. It is great to be an Auburn Tiger.”
While the Tigers will be playing for the national championship in a few weeks, Fountain said he really did not think that is where the 2013 Auburn Tigers would be playing at the end of the season.
“Our goal was to just get better each week,” he said. “Our goal was to make a bowl. But after the LSU game I felt something different about our team. They didn’t quit and they were different after that game in the locker room. They never quit and they’ve never quit believing in one another this season.”
So is there any added pressure on Auburn to bring another national championship to the SEC and the state of Alabama and to keep the two streaks alive?
“We never talk about it as a team,” Fountain said. “I know it’s important to our state and the SEC. but all we can control is this season. We will prepare hard and thoroughly as we always do and see what happens.”
Fountain came to Auburn along with Coach Gene Chizik after spending two seasons (2007-08) on Chizik’s staff at Iowa State as tight ends coach and recruiting coordinator.
Beginning his college coaching career as an offensive graduate assistant at Florida State from 1994-96, he joined the UCF staff in 1997 as offensive guards and centers coach and co-recruiting coordinator.
He spent seven seasons at UCF, becoming offensive tackles/tight ends coach and recruiting coordinator from 1998-2003.
In 2004-05, he was offensive line coach at Middle Tennessee, before moving to Georgia Southern in 2006 as offensive line and assistant head coach.
Fountain began his coaching career as an assistant coach at Flomaton High School in 1988, and moved to his high school alma mater W.S. Neal as an assistant in 1989 before being named head coach at Frisco City High in 1990. After three seasons with Frisco City, he became head coach at Monroe County for the 1993 campaign.
Fountain earned a bachelor’s degree in physical education (K-12) from Samford in 1988 and a master’s degree in educational leadership from Florida State in 1998.
A native of East Brewton, Fountain is married to the former Rosie Hidalgo, who attended Valencia (Fla.) Community College and Iowa State.
They have four sons: Brookes, Hunter, Tanner and Skyler.
Fountain and the 2013 Auburn Tigers will take on the Florida State Seminoles Monday night in Pasadena for the national championship.
Game time is set for 7:30 p.m. and will be televised on ESPN.
Auburn last won the national championship in 2010 under Gene Chizik. Fountain was on Chizik’s staff at that time as well.