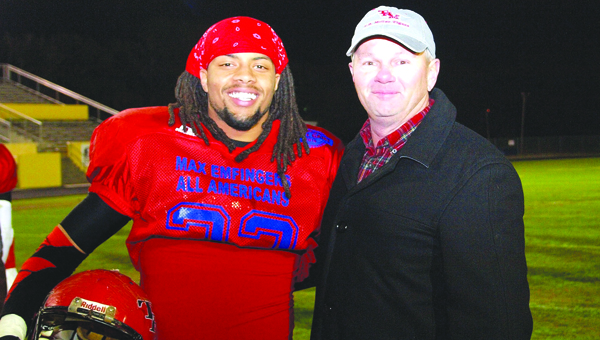 T.R. Miller senior football player Kameron Coleman was among 100 prep seniors from across the nation Friday to take part in the 10th annual Max Emfinger All-American Bowl. The game was played at Tommy Oliver Stadium in Panama City and Coleman’s East team defeated the West 30-0.
“It was a real good experience,” Coleman said. “It got me around people from everywhere. It was like a college atmosphere and it basically got me ready for college. I want to walk-on and play somewhere. I am going to have to be ready to fight for a position and there will be other people out there trying to get the same position you are trying to get.”
Coleman had an 11-yard interception return for a touchdown Friday in the 30-0 win.
“I saw it when it left his hand,” Coleman said. “It seemed like everything just went into slow motion. The only thing I was thinking about was for me to just catch the ball. If I caught it, I knew I was going to be able to do something with it. I was not that far from the end zone. Like coach Riggs said though, he did kind of throw it right at me.”
Coleman said as of right now, his plans are to walk-on and play college football.
“I plan to walk-on and try to get a position on defense,” he said. “I plan to walk on and play at South Alabama. I guess I will play the strong safety position like they had at this weekend.”
Coleman helped lead T.R. Miller to a 12-1 season in his senior year. Coleman and the Tigers went 10-0 in the regular season and won their first two playoff games before falling to eventual state runner-up Leeds.
Coleman also played offense for the Tigers this past fall and finished with 82 carries for 645 yards and scored eight touchdowns. He also caught 14 passes for 296 yards and scored twice.
“It was a really, really good season,” Coleman said. “Everyone stepped up like they needed to do for us to have a good season. Our defense, I feel like, was really the key this year. We had more people running to the ball and doing what they had to do. They were not blowing assignments. We were doing the things we needed to do to win.
“Those were things we were not doing the last couple of seasons. That is why we were undefeated in the regular season I think.”
Coleman offered thanks to Emfinger for letting him play in the game.
“I want to thank them for the opportunity to play,” Coleman said. “I was able to showcase my talent in this game because there were people from everywhere in this game. There were people from Illinois, Iowa, Louisiana, Tennessee, South Carolina and even some from around here like in Elba and Greenville. If I am able to walk-on and earn a starting position, it would feel pretty nice.
“After not getting a scholarship, to be able to walk-on and still play, I think it would be really nice. I would feel like I accomplished something.”