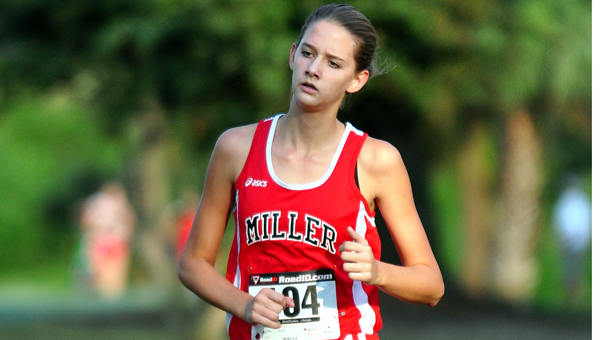 CHICAGO (January 8, 2014) — In its 29th year of honoring the nation’s best high school athletes, The Gatorade Company, in collaboration with USA TODAY High School Sports, today announced Karisa Nelson of T.R. Miller High School as its 2013-14 Gatorade Alabama Girls Cross Country Runner of the Year. Nelson is the first Gatorade Alabama Girls Cross Country Runner of the Year to be chosen from T.R. Miller High School.
The award, which recognizes not only outstanding athletic excellence, but also high standards of academic achievement and exemplary character demonstrated on and off the racecourse, distinguishes Nelson as Alabama’s best high school girls cross country runner. Now a finalist for the prestigious Gatorade National Girls Cross Country Runner of the Year award to be announced in January, Nelson joins an elite alumni association of past state award-winners in 12 sports, including Ryan Hall (1999-00, 2000-01, Big Bear HS, Calif.), Derek Jeter (1991-92, Kalamazoo HS, Mich.), Candace Parker (2001-02, Naperville Central HS, Ill.), Abby Wambach (1997-98, Our Lady of Mercy, N.Y.) and Mark Sanchez (2004-05, Mission Viejo HS, Calif.).
The 5-foot-8 senior distance runner won the Class 3A individual state championship with a time of 17:55.18 this past season, leading the Tigers to second place as a team. Also the Runner of the Year as named by The Mobile Press-Register, Nelson finished 31st at the Foot Locker South Regional championships in 18:01. She captured the Class 3A individual state championship in each of her final five seasons in addition to placing second as a seventh grader in 2008.
Nelson has maintained a 3.92 GPA in the classroom. In addition to donating her time as a youth volleyball and swimming instructor, she has volunteered on behalf of her church’s youth group, Habitat for Humanity and multiple charitable Christmas gift-giving campaigns.
“She has an incredible amount of talent, but what sets her above the other competitors is her desire to be successful,” said T.R. Miller head coach Rob Atkinson. “Her attitude during competition and training is what sets her apart from others. She has the mindset that she will be the best regardless of the situation she is in, and will not let tough competition bother her. Her practice habits far exceed any that I have seen in my 20 years of coaching.”
Nelson has verbally committed to an athletic scholarship at Samford University beginning this fall.
The Gatorade Player of the Year program annually recognizes one winner in the District of Columbia and each of the 50 states that sanction high school football, girls volleyball, boys and girls cross country, boys and girls basketball, boys and girls soccer, baseball, softball, and boys and girls track & field, and awards one National Player of the Year in each sport. The selection process is administered by the Gatorade high school sports leadership team in partnership with USA TODAY High School Sports, which work with top sport-specific experts and a media advisory board of accomplished, veteran prep sports journalists to determine the state winners in each sport.
Nelson joins Gatorade Alabama Girls Cross Country Runners of the Year Carmen Carlos (2012-13, 2011-12, 2010-11 & 2009-10, McGill-Toolen Catholic High School), and Madeline Morgan (2008-09 & 2007-08, Mountain Brook) as athletes who have won the cross country award since its inception in 2007.
To keep up to date on the latest happenings, become a fan of Gatorade Player of the Year on Facebook and follow us on Twitter. For more on the Gatorade Player of the Year program, including nomination information, a complete list of past winners and the announcement of the Gatorade National Player of the Year, visit www.gatorade.com/poy.