Brewton Iron Works all in the family again 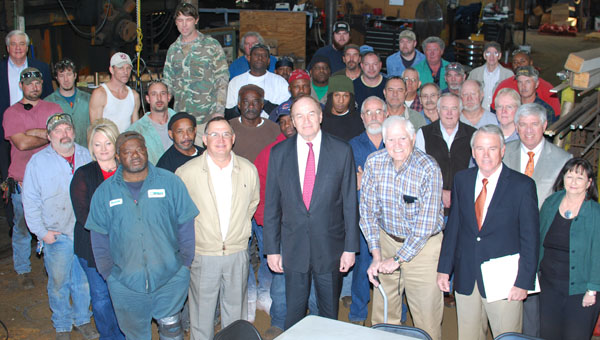 Local investors and the hard work of local employees will keep Brewton Iron Works open — and in the hands of the family that has run it for decades.

Brewton Iron Works owner Earle Wilson celebrated the return of the company to his family Monday with a signing attended by U.S. Sen. Richard Shelby, local officials and plant employees.

Shelby was on a tour of industries in the region, part of his commitment to meet workers in each county this year.

Brewton Ironworks was established in 1989 by the Lovelace Lumber Co. — forebears of current Brewton Mayor Yank Lovelace — for overhauling and maintaining steam locomotives.

Earle Wilson’s grandfather, W.F. Wilson, came to manage the company in 1903, and was offered a partnership in the business seven years later.

The family has maintained its ties to the company since then.

“From that, this developed,” Earle Wilson told Shelby Monday, showing off just some of the iron castings Brewton Ironworks makes.

“This is good for Brewton,” Shelby said.

“This is good for everybody,” said Rick Wilson, Earle’s son, the company’s president.

Earle Wilson said the family has actually sold and bought back the business twice in its history.

The company makes ductile and gray iron castings for a variety of industries, including automotive, valve and pump, agricultural equipment, electric motor and paper.

Rick Wilson said the company’s local investors helped save the 38 jobs at the plant — and the workers themselves have been an integral part of the successful transition. Employees even voted to forego a raise to help the management team buy back the plant.