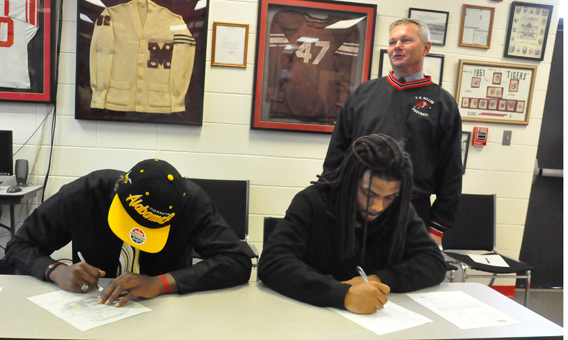 T.R. Miller football players Dominique Jackson and Kameron Coleman joined other football players across the nation Wednesday as they signed football scholarships and National Letter of Intents to play college football.
Jackson signed a scholarship with Alabama State while Coleman will play at Miles College.
Jackson, who made the Alabama Sports Writer’s Association first team all-state, finished with 146 carries for the Tigers and rushed for 1,528 yards and had 25 touchdowns. He also caught five passes for 58 yards and scored twice. Jackson will play linebacker at Alabama State.
“It feels really great to sign a football scholarship,” Jackson said. “I have been wanting this for a while now. My brother has been pushing me ever since he didn’t get one. He has pushed me to go hard and do everything. I really like the environment around Alabama State and I really liked the facilities. I want to go to college and get a good education.”
Coleman also played offense for the Tigers this past fall and finished with 82 carries for 645 yards and scored eight touchdowns. He also caught 14 passes for 296 yards and scored twice.
Coleman was among 100 prep seniors from across the nation recently to take part in the 10th annual Max Emfinger All-American Bowl. The game was played at Tommy Oliver Stadium in Panama City and Coleman’s East team defeated the West 30-0. Coleman will play running back at Miles.
“It feels really good to sign a scholarship today,” he said. “I feel really accomplished, like I got something done. I am just overwhelmed. Miles College was just really close to home and it didn’t feel to big. I didn’t want to go anywhere where the professors wouldn’t know my name. I want to be able to be seen. I just want to be able to get a good education. That is what I am there for and this is why I am there and that is what I am going to do. Hopefully I can pursue my marine biology degree.”
Tiger head coach Jamie Riggs said he thinks both players will do great in college.
“First of all, both of them were really good practice players,” he said. “In addition to both being good practice players, they are also really good students. They set good examples for all the other players and that has been the most important than anything they have done. I really, in particular, think Kameron was a great leader for us. He certainly, as I have said before, has been one of the most important players I have had here in my 25 years. He really set the tone for all the success that we have had.”
Riggs said Dominique had a really good year for his team and did so many things for the Tigers.
“He kicked off for us, returned kicks, rushed the passer and ran the ball for us this year,” he said. “It is like we are going to miss three different players because of that. They both contributed in so many ways and I am just really proud of them to get this opportunity. I really think that they will be highly successful because in addition to be being really good athletes, they are both really great kids.” 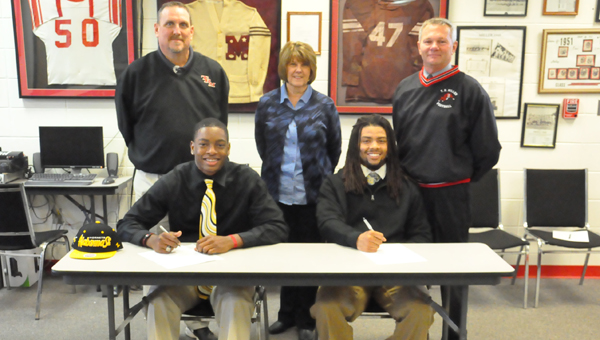 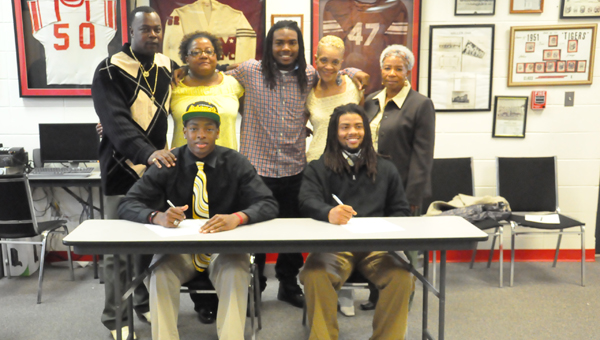