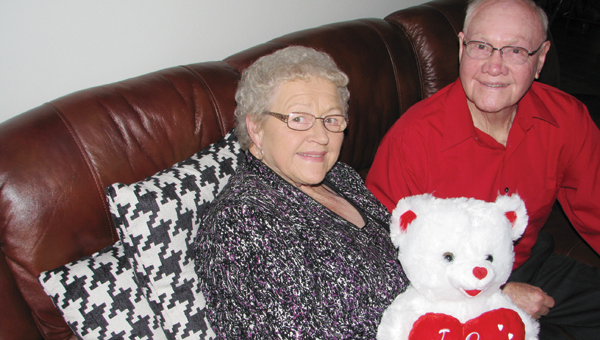 Valentine’s Day isn’t officially until Friday, but Cupid, AKA Leonard Peevy, has already made an appearance on Roger’s Lane.

Peevy and his wife, Lucille, have been married for 55 years, so the couple should know a thing or two about love and how to have a successful marriage.

Tip number is communication, he said.

“We met at church,” he said of he and his wife. “I remember it like it was yesterday. I saw her and every time after that I’d peek around the corner at her and say, ‘That’s the one I need.’”

His wife agreed, holding up a stuffed bear that arrived at their home earlier this week, and said the longtime VA service office and two-term Escambia Tax Collector has always been the one for her.

Both agreed that communication is key, and that’s the advice they give to all young couples, including their granddaughter who will wed in April.

“From the start, we were close,” Peevy said. “I learned her, and she learned me. We never had any problems we couldn’t talk out. Having a successful marriage – or relationship – it’s about knowing the other person from both sides.

“You have to be understanding, and you have to be in touch with the Lord,” he said. “Do those two things, and remember that the church is your binding rock, and you’ll be OK. You won’t have to work too hard at Valentine’s Day.”

When asked how the couple plans to spend Friday, Peevy said he hopes to convince his wife to go out for a night on the town.

“Maybe I can convince her to take me out to eat or something,” he said with a laugh. “After all, she already has the best Valentine’s Day gift – me.”