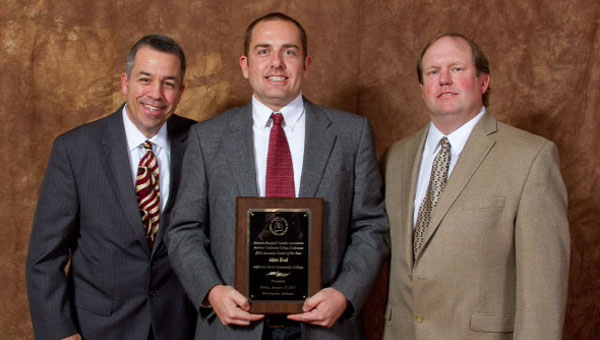 Former Jefferson Davis Community College Warhawk baseball assistant coach Adam Reed was recently awarded a prestigious honor as the Alabama Baseball Coaches Association awarded Reed with the Alabama Community College Assistant Coach of the Year. Reed was awarded the award at an awards banquet in Birmingham last week.
Barry Dean, the Executive Director of Alabama Baseball Coaches Association, and Lee Gann, who is on the Alabama Baseball Coaches Association Award Committee, presented Reed with the award.
“This was a tremendous honor for me with so many outstanding coaches throughout the state of Alabama,” Reed said. “To be put in the same category with some of the previous assistant coaches who have been given this award is definitely the highlight of my young coaching career. Last year was my third year as assistant coach at JDCC for coach Darrell Blevins, and although the season might not have turned out the way we had hoped, it is a testament of the hard work that was put in by everyone in our program. If it weren’t for coach Blevins and the hard work of the players I never would have been considered for this prestigious award.”
As for Blevins, he said he was happy for Reed.
“I have had the opportunity to have some excellent people serve as assistant coaches here at Jeff Davis during my time,” Blevins said. “I have always wanted the assistant coach position to be a position that allows individuals to learn more about the game of baseball, grow in their coaching abilities, and prepare themselves for a possible career in athletics while developing skills to enhance the lives of the young people we are so blessed to work with. I am so happy for Adam to have received this award. He made the absolute most of his three years here at JD and I truly feel he enjoyed every minute of his experience.”
Blevins said it was very hard for him to see Reed go.
“There are individuals you come across in life that will work hard with you and over time there is a trust that develops,” Blevins said. “We were able to get on the same page quickly. Adam knew exactly what was expected of him, how he was expected to care for his responsibilities, and the specific role that he was expected to fill as our assistant. He did an excellent job at fulfilling those responsibilities and it showed in the successes we had in our program during his time here. From recruiting, the academic achievements, the number of players who have had the opportunity to move on, improved level of play overall, and the improvements in the program as a whole. Adam had a tremendous positive impact for Jefferson Davis and our players. It was an honor to have him as part of our program. He has a good position now with the Pensacola Department of Parks and Recreation and I am sure he is fulfilling his new duties and responsibilities with the same professionalism that he had while he was here at JDCC.”