BIRMINGHAM, Ala. — The Gulf South Conference is proud to announce its 2013 Fall Sports All-Academic Team.
Sixty-nine student-athletes, including three three-time members and 19 two-time standouts were selected: men’s cross country (8), women’s cross country (7), football (20), men’s soccer (12), women’s soccer (14) and volleyball (8).
Academic All-GSC Teams are selected by the Gulf South Conference Sports Information Directors (SIDs) and Faculty Athletic Representatives (FARs) in a joint vote. Nominees must have an overall grade point average (GPA) of 3.20 or better on a 4.00 scale for their entire academic career and may not be freshmen or first-semester or quarter
transfers. The student-athlete must be a significant contributor to the squad. Other factors include leadership, community service and extra-curricular activities. SIDs and FARs are not allowed to vote for their own student-athletes. The number of student-athletes selected in each sport is determined by the number of positions normally involved in the playing of that sport. Ties are not broken.

Cook and UNA ended their season on December 7 in the third round of the playoffs. UNA was crowned the Gulf South Conference Champions this past year.
Cook was also selected as the 2013 All-Gulf South Conference First Team Utility Player – voted on by all the GSC coaches. His award was for utility player was because he was the starting tight end, H-Back and long snapper.
Cook was also selected as the 2013 Daktronics All-Super Region 2 second-team tight end – voted on by Sports Information Directors. 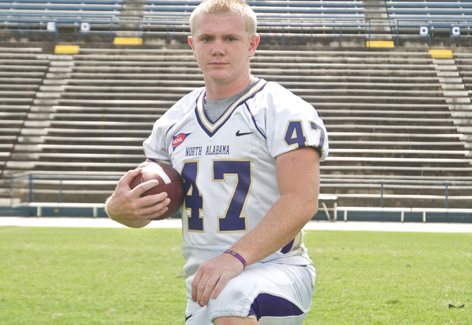 Cook graduated in December with a degree in Business Management. He is working as a Field Engineer with Robins & Morton Construction Company.