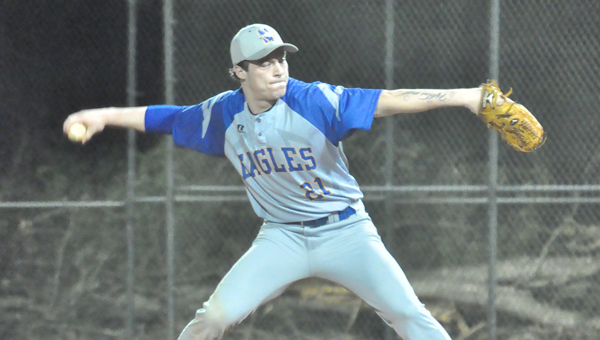 In the second day of their 2014 Eagle Classic Tuesday at home against Monroe County, the W.S. Neal Eagle baseball team improved to 2-0 this season with an 11-0 win over the Tigers in five innings.
W.S. Neal jumped on the Tigers from Monroeville early and often as they plated five runs in the first inning, four in the second and one each in the third and fourth innings to get the 11-run win.
While racking up 11 runs in the win, the Eagles of East Brewton used a trio of pitchers in the win. Jared Cooper, Colton Morris and Dalton Shell all pitched for W.S. Neal with Cooper getting the start and the win. Cooper, Morris and Shell combined to only allow one Monroe County hit.
Cooper went the first three innings and allowed one hit, walked three and struck out six. Morris went the fourth inning and walked two while Shell went the final inning and struck out one.
At the plate for W.S. Neal, Patrick Glass had a single while Cooper had two singles and two RBIs. Malcolm Hawthorne added an RBI on a sacrifice fly.
Houston Grey had a single and an RBI while Brandon Carmichael had an RBI. Rob Jones added a double while Shell had one RBI.
All W.S. Neal players saw playing time in the win.
W.S. Neal’s middle school team was scheduled to host Monroe County Thursday at 4 p.m.
The varsity team will be back in action Monday when they travel to Clarke County to face Washington County in a tournament. Game time is set for 4 p.m.