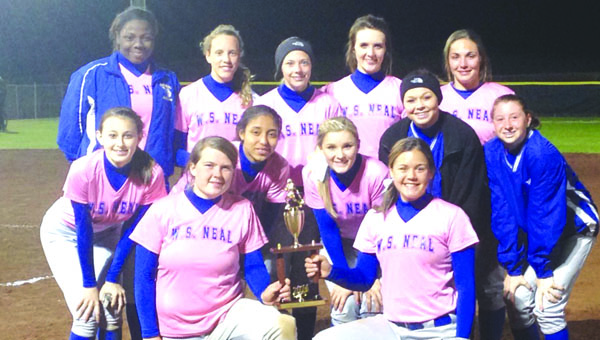 Playing in the Jan Overstreet softball tournament Saturday in Thomasville, the W.S. Neal Lady Eagles softball team went 4-1 and captured second play. The 4-1 record in tourney play Saturday improved W.S. Neal to 4-2 overall this season.
In their first game Saturday, W.S. Neal defeated Southern Choctaw 7-3. In their second game, W.S. Neal edged out Excel 3-2 to win their pool play.
In the single elimination part of the tournament, W.S. Neal routed Escambia County 15-1 and then took out Choctaw County by a score of 11-1 to advance to the championship game.
In the championship game, the Lady Eagles met up with Excel again and suffered a 13-1 loss to win the tournament runner-up trophy.
“I am extremely proud of this team and the way they played all day,” W.S. Neal Lady Eagle head softball coach Jeff Haney said. “The championship game was not a representation of the way we played at all. We simply ran out of gas after the four previous games. Haleigh Dubose did a remarkable job pitching for us all day. No other pitcher in the tournament went four complete games. Coach Jason Blaney did a great job calling pitches all day and Haleigh executed them well. Our defense made some big plays for us throughout the day, but we still have some things to work on there. I was really impressed with our bats all day long. Every member of our team contributed to our offensive output and I was glad to see it. If we continue to hit the ball this well, we will be tough to beat on any given day.”
W.S. Neal is scheduled to be back in action Tuesday at home against Excel. Game time is scheduled for 4:30 p.m. for the varsity game and 6 p.m. for the JV game.

Game four: WSN 11, Choctaw County 1
In the tournament semifinals, W.S. Neal cruised to an 11-1 win over Choctaw County.
Brown was 3-for-5 with one triple and three RBIs. Dubose went 2-for-4 with two RBIs while Robinson was 2-for-4 with one run and one walk.
Floyd went 2-for-3 with two walks and two runs while Tori Wyatt went 1-for-3 with one walk and scored one run.
Dubose pitched seven innings and allowed four hits, one run, none earned, walked four and struck out six.

Championship game: Excel 13, WSN 1
After already having defeated Excel 3-2 earlier in the day, W.S. Neal lost to Excel 13-1 in the championship game.
Dubose went 1-for-2 with one RBI and walked one. Brown went 2-for-3 while Wyatt was 2-for-2. Hartsel was 1-for-2 with one run.
Dubose went 4 2/3 innings and allowed nine hits, seven runs, walked four and struck out one.
Shanea Kaylor went 2/3 innings and allowed seven hits, six runs, and walked two.