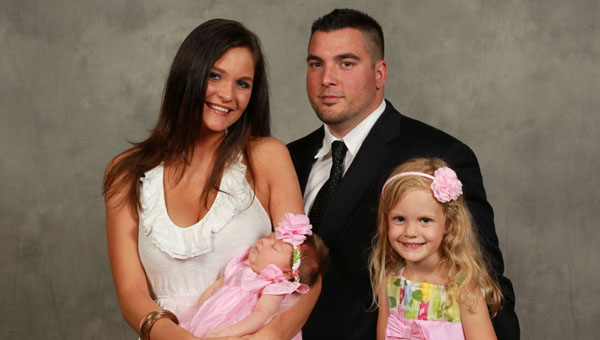 Wilcox, back right, has been named as the head coach of Marion County. Wilcox is a 2002 graduate of T.R. Miller.

GUIN – Marion County High School hired 30-year old Brandon Wilcox as the Red Raiders new head football coach.
Wilcox was the linebackers coach at Class 6A Enterprise and will be undertaking his first head coaching position.
The new head coach also played for T.R. Miller High School in Brewton. While he played tight end and defensive line for the Tigers, Wilcox helped his team win the Class 4A state championship in 2000.
The Brewton native played linebacker for the University of North Alabama and was a member of the Gulf South Conference championship team in 2003.
In 2007, Wilcox served as an assistant linebacker coach for the Lions. While at UNA, Wilcox earned his bachelor’s degree in social science and secondary education.
Wilcox held coaching positions at Verbena High School (defensive coordinator, head strength and conditioning coach), Carroll High School (head strength and conditioning coach), Dale County High School (offensive line, linebacker and head strength and conditioning coach) and his most recent stint at Enterprise as the linebackers coach.
Wilcox stated that Guin’s football tradition and the town appealed to him.
“Marion County has a great tradition,” Wilcox said. “Mr. (Jason) Bourland (Marion County High School’s principal) called me to look at the school and the surrounding area, and it is a great place to raise a family.”
Wilcox and his wife, Lauren, have already found a house in Guin. Lauren is a physical therapist.
The couple have two daughters in 5-year-old Faith and 10-month-old Harper.
Wilcox recognizes the high expectations placed on the Red Raiders due to the team’s recent success.
“We are not going to set limits on what we can do. We are going to develop the kids physically and spiritually, and we will continue to have high expectations from the community, faculty and the coaching staff for the whole program.”
The first-year head coach will change the team’s offensive base as well.
“We are going to base our offense out of the spread. We are still going to run the ball and use play-action, just out of a different formations. I am not trying to reinvent the wheel. We will still have to teach the fundamentals of blocking, tackling, and protecting the ball.”
The defensive scheme for the Red Raiders will largely depend on the personnel.
“Coach (Rusty) Clark will be with us, so we will get together and look at our personnel. The scheme of our defense will be predicated on what the kids can do, not any particular formation.
“I will spend a little bit more effort on the offensive side of the ball, since we are transitioning to the spread. I will look to delegate as much as possible, but we will all do things a little bit differently.”
The former strength and conditioning coach will make sure that the Red Raiders are physically prepared for the season.
“We will take the weight room seriously. It will allow the players and coaches to form a bond, as well as develop mental toughness,” Wilcox stated.
Wilcox considers himself to be a “sports junky” and uses his free time to “watch football anytime I can.”
The 30-year-old coach grew up as a Southern Baptist, but has been to several different denominations.
“We will just have to see what fits best as a family when it comes to church.”
The official vote for the school board takes place today, Feb. 26, for the hire to become finalized.