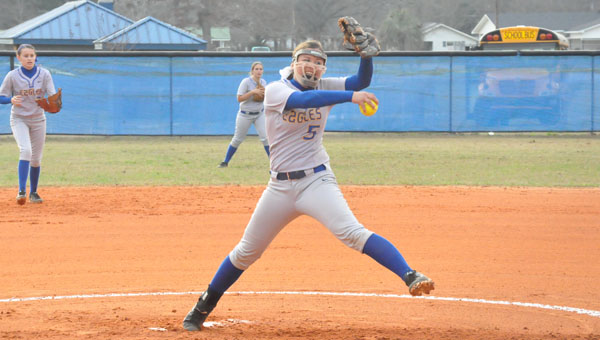 Facing off against the Excel Lady Panthers for the third time in four days Tuesday at home, the W.S. Neal Lady Eagles softball team picked up a 7-4 win. With the win, W.S. Neal improved to 5-2 this season. The two teams met twice on Saturday in the Thomasville softball tourney with W.S. Neal winning the first game between the two teams, but Excel won the second game—the tournament championship.
In the game Tuesday, W.S. Neal scored five runs in the first inning to help propel them to the three-run win.
Leading 5-0 after the first, W.S. Neal added two more runs in the second inning to build a 7-1 lead after two complete innings after Excel scored one run in the top of the inning.
From there, W.S. Neal was held scoreless the remainder of the game while Excel plated one run in the fifth inning to cut the lead to 7-2.
In the top of the seventh, Excel added two more runs to cut W.S. Neal’s lead to 7-4, but with runners on first and second, W.S. Neal got out of the jam to get the win.
Haleigh Dubose was the winning pitcher for W.S. Neal. Dubose went the complete game seven innings and allowed five hits, four runs, walked four, hit one and struck out eight.
At the plate, KeKe Floyd had a single along with Karissa Johnson.
Dubose, Kaeli Brown, Tori Wyatt, and Christina Robinson all added a single and one RBI each in the win.
W.S. Neal’s JV team fell to 0-2 Tuesday after falling to Excel. The JV team will be back in action Thursday in Jay. Game time is set for 4 and 5:30 p.m.
The varsity Lady Eagles will play in T.R. Miller’s TRM Invitational Friday and Saturday in Brewton.
No game stats from the JV game from Tuesday were known as of press time.