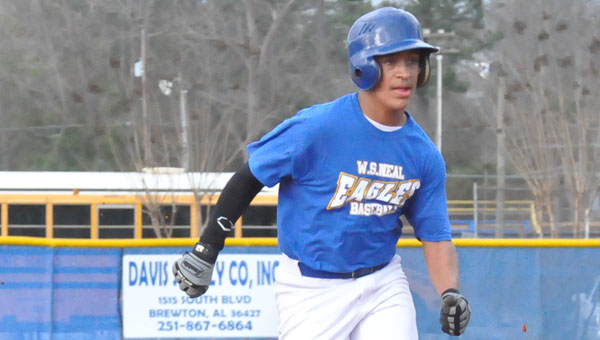 The W.S. Neal Middle School baseball team captured two 11-1 wins over Flomaton Tuesday at home to keep their record perfect this season as they improved to 4-0.
In game one, W.S. Neal held Flomaton to one lone run in the second inning while plating four of their own in the fourth and third innings while added two in the second and one in the fourth.
Connor Huskey earned the win on the mound for the Eagles as he went four innings and allowed one run on two hits, walked three and struck out four.
At the plate, Jacobey Hawthorne had two hits, two RBIs and three stolen bases while scoring three runs. Huskey added one hit, one stolen base and scored one run while Matt Hutchins added one hit, one run, two RBIs and one stolen base.
In the second game—another 11-1 win for W.S. Neal—the Eagles of East Brewton held Flomaton to one run in the third inning while scoring five of their own in the first inning, three in the second, one in the third and two more in the fourth to get their second straight mercy rule win.
Brandon Moye earned the win on the mound for W.S. Neal. Moye went four innings and allowed one run, two hits, walked two and struck out six.
At the plate, Hawthorne had one hit, two runs and one RBI while Kristian Taylor had one hit, scored three runs and had one RBI.
Moye added three hits, a double, four RBIs and scored two runs while Hutchins had two hits, one double, scored one run and had three RBIs.
W.S. Neal will be back in action on Monday, March 3, when they travel to Monroe County for a 4 p.m. doubleheader.