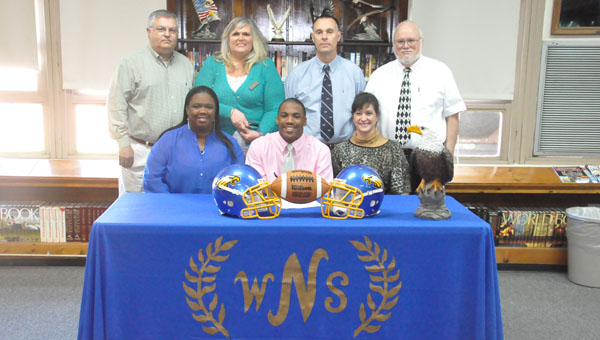 It may have been a few days after National Signing Day, but W.S. Neal’s Michael Williams signed a college football scholarship Thursday morning to play at for former East Brewton resident and W.S. Neal alum Teddy Keaton at Stillman College in Tuscaloosa.
“It is a honor to sign a college football scholarship today,” Williams said. “Stillman is a winner. I hope to go up there and start and go on to bigger and better things.”
Williams was joined by his mother Valerie Anderson at the signing along with W.S. Neal administration, faculty and head football coach Doug Hoehn.
Williams’ favorite teacher Kraig Rittenhouse was on hand for the signing.
“Michael is just an excellent young man in academics and athletically,” Rittenhouse said.
Hoehn said Williams is well-deserving of the scholarship he signed Thursday.
“Michael was a sophomore when I arrived,” Hoehn said. “He has improved vastly. He was our leading tackler on defense and was our captain. Michael is a fine example of someone who has worked hard and has bought into what we are trying to do here. He makes good grades and has a 3.85 GPA and made a 23 on the ACT.”
Hoehn said he sent 70 different schools, besides the ones in Alabama, and Williams had strong interest from 12 different schools.
“He decided to remain close to home as he is very close to his mom,” Hoehn said. “Coach Keaton does a great job with the kids. He just does a great job of recruiting. We have three kids up there now and that aided Michael’s decision along with his talk with coach Keaton. Mike has just done a great job for us. We couldn’t be happier. This is a great time of the year for me is to see these kids sign. I think that is the most important part about my job. Our job is to give them options and their job is to decide where to go. We provide them and their parents with information at an early age and that is what we are trying to do here. The faculty here is a great about helping. There is a school out there for everyone if the kids want to work hard and Michael is a great example of that. We are just excited about it. We hope we have more kids step up like Michael to be able to sign more scholarships.”
Williams will join three players from last year’s W.S. Neal football team—Tavin Ingraham, Josiah Nettles, and Bryson Peterson— in Stillman and will also join T.R. Miller’s Kieon Smith. Smith signed with Stillman a few weeks ago.