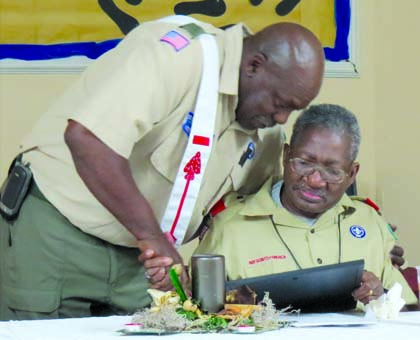 For nearly a decade, being a Boy Scout in Troop 63 meant you had the attention of the trooper leader who founded the group in 1950.

Samuel “Sammy” Smith was honored for his dedication to the young men of the area Friday in a ceremony that included two presentations in honor of that service.

“Mr. Sammy has been dedicated to the service to the Boy Scouts for so many years and has touched so many lives,” Watson said. “We are pleased to honor that dedication.”

After Smith helped secure the charter for the group, he worked with young men in the area to teach them the values and ideals of scouting.

“I did all of those things because there was a need,” Smith said of his time with the Scouts. “A lot of people don’t have time for kids.”

Watson spoke of Smith’s dedication relating how much time, effort, teaching and even money the honoree gave for the benefit of the children.

“He has always gone beyond what was necessary,” Watson said. “He left nobody out and went out of his pocket and out of his way to take a lot of kids to camp.”

Smith, who is also a member of the Brewton Sportsman Club who holds the charter for Troop 63, was also honored for his dedication to the group.

“Mr. Sammy was a scout leader for almost 50 years,” Powell said. “Some of us don’t want to take our own children on vacation. But, this man would take a week of his own vacation time to take kids camping. He was taken as many as 60 at one time and as few as one. He has served the community well.”

With six of the original 10 Eagle Scouts who earned the distinction under Smith’s leadership on hand, Smith was presented with the first Samuel Smith Humanitarian Award.

“Mr. Sammy has given a lot to us,” Watson said during the presentation. “We hate to lose what he has given us and we have established an award in his name. We are presenting the inaugural award to him for his work and dedication to the Scouts and to the community. We will be choosing someone deserving in the future who has shown the same dedication and service that Mr. Sammy has over the years.”

Smith said he was delighted to see some of his Eagle Scouts on hand for the event and was pleased with their station in life.

“The result of my efforts is seen here,” Smith said Friday night. “My Eagles are here. Some of them have really made something of themselves. I appreciate this honor. Thank you very much.”

“Mr. Sammy has accomplished a lot in his lifetime but he has always remained humble,” Watson said. “He has been an active member of the Sportsman Club, served as a Red Cross board member, a member of the Disaster Relief Team and taught first aid and CPR with Red Cross. He was chosen as EMT of the Year in Escambia County in 2000 by the Southwest Alabama Emergency Medical Services System. He has shown his dedication to his fellow many for decades and we are happy to honor him now.”