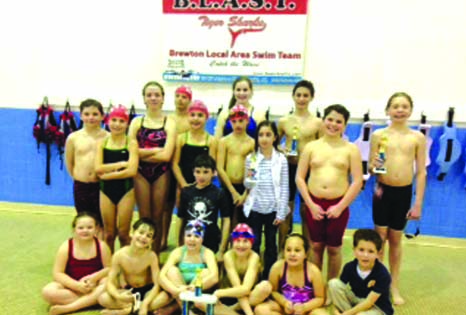 The Brewton Local Area Swim Team has been blowing up the blocks and making waves this season.
The past four weeks have been a whirlwind of competitions, beginning with the PNY Polar Bear Invitational, then SES Districts and 8U Southeasterns in Pensacola and ending with a spectacular Southeastern Short Course Championship meet in Nashville, this past weekend.
The PNY Polar Bear meet which was held in Gulf Shores, produced three high point winners for team Tigershark, and a second place overall team award.
Kinsley Byrd, a stand out 8U Tigershark, phenomenal breaststroker, and daughter of Beverly and Dylan Byrd, swam hard to earn a high point runner up trophy as well as seven individual medals and a winning relay medal
Cole Jernigan, standout National level backstroker, and son of Felicia and Lee Jernigan, took high point trophy in the 11-12 boys, sweeping the medals with the exception of the 100-ﬂy where he was just out touched for first.
Colby Morris, stand out freestyler for Team Tigershark, and son of Brandee Chase Morris, also brought home the 13-14 boys high point trophy, winning medals in all of his events, sweeping day two with all gold medals.
Other standout swimmers who won several medals and hitting just off the trophy stand, were:
• Mac Baxter, 11-year-old Breastroker and Flyer who ended up in third overall in the high point standings.
• Addison Heath, 8U standout freestyler, medaled in every event and took third overall in the point standings
• Elizabeth Glass, 11-12 stand out freestyler also swam great in Gulf Shores medaling in her events and placing fourth overall in the high point standings.
Other Tigersharks in attendance were: Matthew Kirkland, Caleb Kent, Callie Kent, Rylee Huskey, Ruthie Huskey, Jason Davis, Caleb Davis, Lauren Thompson, Joseph Carpenter, Jocelyn Carpenter, Braxton Peebles, Tiffany Gookin, Hannah Johnson, Patrick Noble and Mary Ashlynn Williams.
Districts (8U Southeastern Championships) were held in Pensacola the last weekend in
February, and team Tigershark once again had some stand out swims.
In 8U we had several win individual medals:
Matthew Kirkland, son of Jeff and Heather Kirkland medaled in the 100 freestyle, and had several other banner swims, anchoring the 8U boys relay team.
Kinsley Byrd, daughter of Dylan and Beverly Byrd, won several medals in breast stroke, back stroke and butterﬂy.
Addison Heath, daughter of DeWayne and Dr. Melissa Heath, also won several individual medals in freestyle and butterﬂy.
Addison, Kinsley, Tiffany and Hannah were all part of the 8u girls medal winning relay team as well.
For our 9-and-up swimmers, this meet was a district championship, and last chance opportunity to achieve Southeastern Meet of Champions cuts for a trip to Nashville.
Cole Jernigan, stand out swimmer and phenomenal back stroker earned his third cut in the
200-freestyle, and Nolan Atkinson capped off his 10U run at this meet with a total of 14 individual cuts for Nashville.
Elizabeth Glass, also cut the 50-freestyle for Nashville this Short Course season.
Other Tigersharks in attendance, who set Personal Best Times were:
Patrick Noble, Sara Scott, Jocelyn and Joseph Carpenter, Rylee and Ruthie Huskey, Jason and Caleb Davis, Tiffany Gookin, Colby Lisenby, Hannah Johnson, Caleb Kent, Mary Ashlynn Williams, Chaz and Tyler McGhee.
Nolan Atkinson, was the lone representative for team Tigershark this season in Nashville, although others made the cut, he was the only swimmer who made the trip.
There were 1,050 swimmers from all across the Southeast, including Alabama, Tennessee, NW Florida, part of Georgia and a slice of Mississippi, in the 10U boys overall there were over 150 swimmers, and Nolan Atkinson, son of Rob and Lisa Atkinson, represented Brewton, and our team with great honor.
At Southeasterns, only the top-8 swimmers in each event bring home an award for their efforts, and each athlete that makes the cut to be able to swim in this Elite meet, can only swim seven events over a three-day period. Nolan, a pure freestyler blew up the blocks in Nashville medaling in two individual events, winning Bronze (3rd) in the 100-yard freestyle and fourth in the 50-yard freestyle. 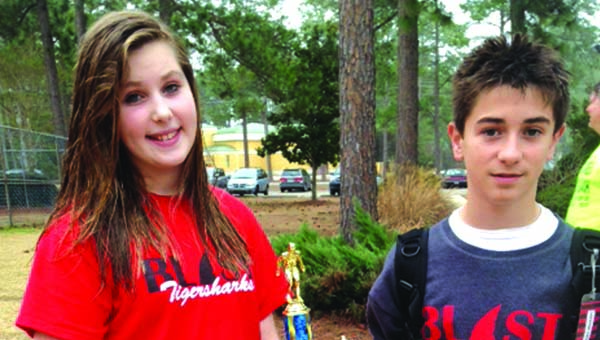 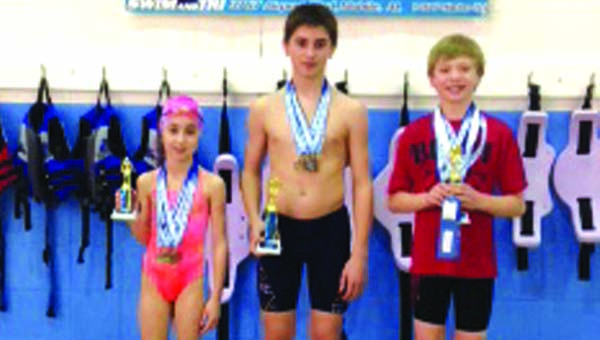 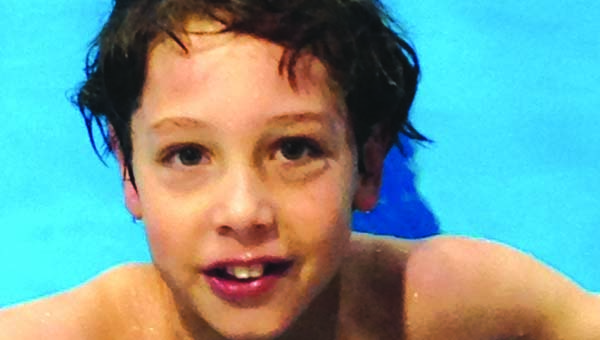