‘To New Beginnings’: Bell named Citizen of the Year 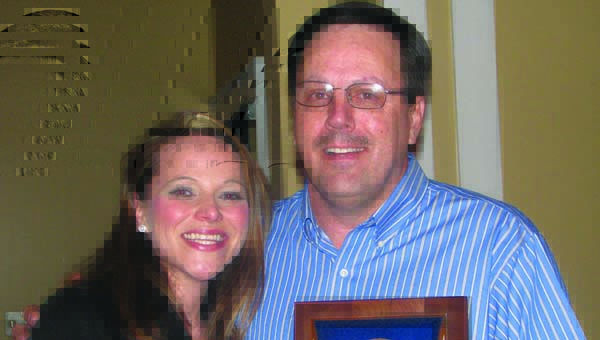 “The battle started in Brewton and the battle must be won in Brewton.”
With those words, Thomas “Bo” Bell, AKA Pastor Bo, accepted the Brewton Chamber of Commerce’s “Citizen of the Year” award for 2014.
Bell was introduced by Escambia County Habitat for Humanity director Alecia Glaize.
“(Bell) surrendered his life, including his drug addiction to Christ, and this new man in Christ became passionate for those who struggle with addition,” Glaize said of Bell. “God gave him a vision – a vision to found a faith-based treatment center in Brewton to serve those enslaved by drugs and alcohol.”
And from that desire New Beginnings Ministries was founded.
“(Bell) reaches out to help with those sorts of problems that most feel overwhelmed and helpless about,” Glaize said. “But, directing a substance abuse center wasn’t enough.”
Three years later, Bell founded New Beginnings Worship Center and converted an old bar into a place of worship. When the congregation grew, Bell converted an old factory into a 60,000 square-foot worship and outreach center. It grew to encompass a food pantry, clothes closet and Red Cross office.
Members of Bell’s treatment center now volunteer with Habitat to create homes for the less fortunate, and he works at the Habitat ReStore, Glaize said.
During his acceptance speech, Bell was candid about his battle with cocaine – and the work he now does to serve Brewton.
“It’s truly an honor to serve in this city,” Bell said. “I was addicted to crack cocaine. I ran the streets in Brewton. I moved to Mobile, entered rehab. I started working in rehab, and I was led. The Lord told me that the battle started in Brewton, and the battle must be won in Brewton. The Lord brought me back to a great city.”