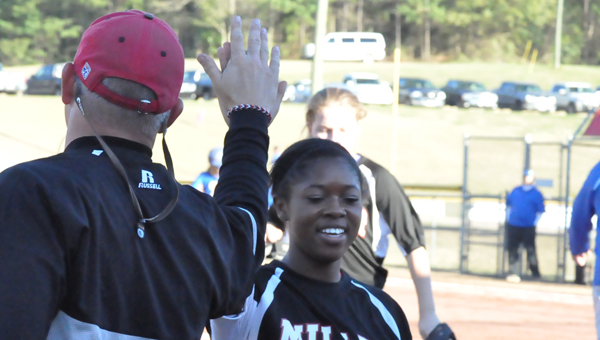 After falling to area opponent and rival W.S. Neal the last five teams the two teams met, T.R. Miller Lady Tiger Moriah Brundidge helped end that streak Thursday at home as she pitched T.R. Miller to a 6-0 win over the Lady Eagles.
Brundidge went the complete distance in the circle and allowed three hits, walked two, hit one and struck out 12 as T.R. Miller improved to 7-2 overall this season and 1-0 in area play while W.S. Neal fell to 9-5 overall and to 1-1 in area play.
The two teams played to a scoreless tie through the first four innings. Neither team had a hit through the first two innings.
The Lady Tigers got on the board with three runs in the fifth inning and added three more in the sixth inning to get the six-run area win.
“Obviously it was a good win,” T.R. Miller Lady Tiger head coach Greg White said. “Number one it was an area win and number two, it was Neal. I thought both team played extremely well. (Haleigh) Dubose pitched well and obviously Moriah pitched well for us. We just kind of got hot there in the middle and put some runs on the board. With Mo pitching the way she did we felt like we had good opportunity down the stretch. It was a good high school softball game. I thought both teams played hard and we are glad to get the win and begin 1-0 in the area. We have a long way to go, but we are glad of where we are.”
W.S. Neal head coach Jeff Haney said his team made too many mistakes against T.R. Miller and didn’t hit the ball.
“I told the girls before the game that we needed to defend the bunt and make solid contact,” Haney said. “We didn’t do either one. They did a great job. I thought (Moriah) Brundidge pitched an excellent game, probably the best I have ever seen her pitch in her career. Their whole team did a great job and they deserved to win. All I can do is say congratulations to them. We are going to have to get back to work and see if we can’t give a better showing next time.”
At the plate for T.R. Miller, Madison Douglas had a single while Steely Ruzic had three singles and three RBIs.
Taylor Austin had a single and one RBI while Myra Reiss had a triple, a single and one RBI.
Erin Hartsel led W.S. Neal with a single and a triple while Kaeli Brown had a single in the loss.
Dubose took the pitching loss for W.S. Neal as she went six innings and allowed seven hits, six runs, three earned, walked three and struck out 10.
T.R. Miller made two errors in the loss while W.S. Neal made five—four total in the fifth and sixth innings.