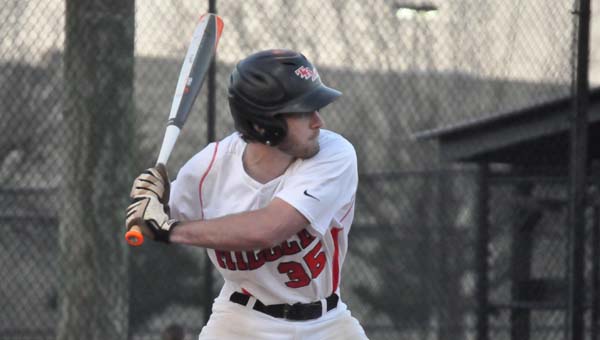 A walk-off single from Zac Griffin brought home the winning run for the No. 5-ranked T.R. Miller Tigers in an 8-7 area victory over No. 10 Bayside Academy Thursday in Brewton. The Tigers improved to 12-3 overall and to 1-0 in area play with the win over the Admirals.
With the game tied at 7-all in the bottom of the ninth, Hunter Brittain got a one-out walk for the Tigers. After Dominique Jackson was substituted for a courtesy runner for Brittain, Tripp Floyd singled to put runners on first and second. From there, Griffin singled to score Jackson from second and give T.R. Miller the one-run area win.
Bayside led T.R. Miller 3-0 after the top of the first inning, before the Tigers roared back with six runs in the bottom of the inning to grab a 6-3 lead.
Both teams plated one run each in the second inning as T.R. Miller held a 7-4 lead. From there, Bayside plated three runs in the fourth and held T.R. Miller scoreless as the game went into extra innings before the Tigers claimed the win in the ninth inning.
Tim McDonald earned the win on the mound in relief of starter Floyd. Floyd went seven innings and allowed five hits, seven runs, one earned, walked six and struck out eight.
McDonald went two innings and allowed one hit, no runs, no walks and struck out none.
At the plate, Jones Manning was 1-for-3 with two RBIs while Drew Williamson was 2-for-5.
Kyle Davis was 1-for-3 with one RBI and Brittain was 1-for-4 with a double. Floyd was 2-for-5, Griffin was 1-for-4 with one RBI, Chris Jones was 2-for-4 with one RBI, Jo Jo Booker was 1-for-4 along with Caden Lodge who had one RBI.