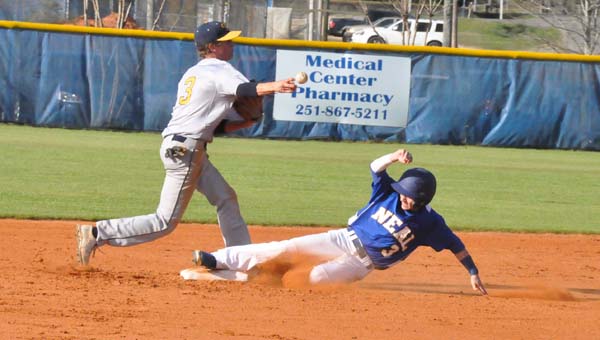 A six-run fifth inning propelled the No. 7-ranked W.S. Neal Eagle baseball team to a 13-3 area win over Cottage Hill Thursday night in East Brewton in six innings.
W.S. Neal led Cottage Hill 1-0 after one inning, but saw their lead vanish in the second inning as the Warriors outscored the Eagles 2-1 in the inning to tie the game at 2-all.
After W.S. Neal plated two runs in the third inning to grab a 4-2 lead, Cottage Hill plated one in the fifth inning to cut W.S. Neal’s lead to 4-3.
From there, W.S. Neal scored six runs in the bottom of the fifth and plated three runs in the sixth inning to build a 10-run lead and get the win my the mercy rule.
Jared Cooper earned the complete game win on the mound for the Eagles of East Brewton as he went six innings and allowed seven hits, three runs, walked four and struck out three.
At the plate for W.S. Neal, Malcolm Hawthorne finished with a single and a double while Taylor Elliott had two singles, a triple, and one RBI. Tyler Joyner added a single while Brandon Carmichael had a double and one RBI.
Dakota Graves added two singles and had two RBIs in the fifth inning to give W.S. Neal a 7-3 lead.
Mike Williams finished with a double and Derrick Barton had a single and one RBI.
W.S. Neal improved to 9-1 overall with their fourth straight win and improved to 1-0 in area play.