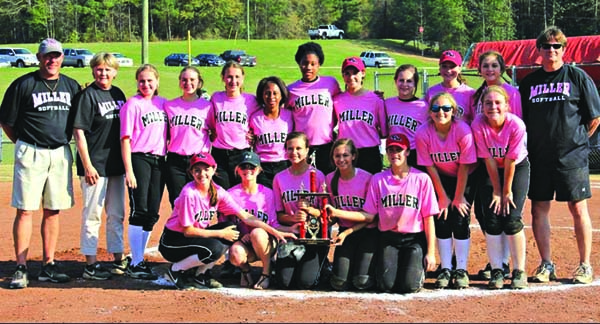 T.R. Miller’s Lady Tiger JV softball team went 4-0 in their own tournament Saturday at the Brewton YMCA Sports Park to improve to 8-1 overall this season and claim the tournament championship.
The Lady Tigers won their first game in pool play by a score of 9-1 over Escambia County.
In their second game of pool play, the Lady Tigers defeated Greenville 10-0 to win their pool.
In the single elimination portion of the tournament, the Lady Tigers defeated Mary G. Montgomery 4-1 to advance to the championship game against Flomaton.
Facing off against the Lady Hurricanes, T.R. Miller earned another shutout win as they won the championship by a score of 4-0.
Overall for the day, the Lady Tigers outscored their opponents 27-2.
“It was a great tournament for our young kids,” T.R. Miller Lady Tigers head coach Greg White said. “We were able to use three pitchers during the day and every kid got to play at some point and time. We hit the ball well and played pretty solid defense all day. I’m just real proud of their effort and attitude up to this point in the season. If these kids can continue to stay unselfish they can do some real good things before the season is over.”
No other stats or game information from the tournament was known as of press time.