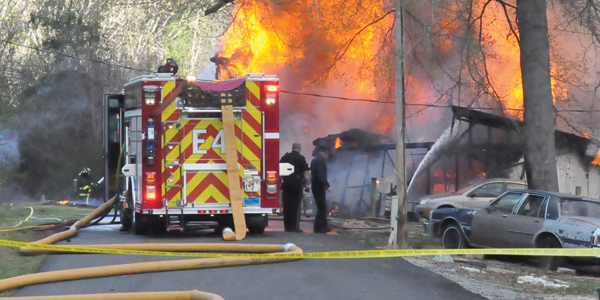 A Brewton woman is alive today thanks to the Brewton Fire Department’s smoke alarm program after a fire totally destroyed her Williams Drive home Tuesday.

Fire Chief Lawrence Weaver said 11 firefighters responded to the blaze around 10:30 a.m. Tuesday and remained on the scene until after 3 p.m. to ensure the blaze had been fully extinguished. The home, located on Williams Drive off Lewis Lane in the Pea Ridge community, was a totally loss, Weaver said.

“The home was fully engulfed when we arrived on the scene,” Weaver said. “We are not sure what caused the fire, but we are looking into the cause.”

Weaver said the homeowner, Adelle Williams, was able to escape because she heard the smoke alarms. Her son, Nathaniel, said he was thankful for the alarms.

“The firemen came out about six months ago to check the alarms,” Williams said. “They made sure the alarm worked, and it did.”

Weaver said the Brewton Fire Department has had a smoke alarm program in place since 1999 in the city.

“We install alarms and check the batteries in them on a regular schedule for our citizens,” Weaver said. “It makes you feel really good when you know all of that work has saved somebody’s life.”

High, shifting winds caused off-shoots of the blaze to ignite not only the woods behind the home, but also debris on top of a neighboring home and debris in the yard of another home.

Personnel from the Brewton fire and police departments secured the area as neighbors watched the proceedings. Some of those neighbors lent a helping hand as the fire tried to spread.

The East Escambia Chapter of the American Red Cross was called in to assist the Williams in the recovery process.