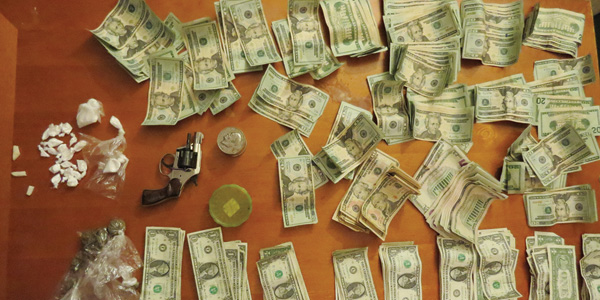 Police seized an estimated $2,800 in cash, a handgun and an assortment of drugs from a West Jackson Street apartment Monday.

Police have arrested two after finding an alleged “drug den” across from the Brewton Elementary School playground and public library.

Casey said when police made entry into the apartment, they were greeted with not only Porterfield, but also with 43-year-old Felecia Barton – and an assortment of drug paraphernalia items.

“That’s when we backed out of the apartment and obtained a search warrant for the premise,” Casey said. “Once the search was conducted, we recovered an estimated $2,800 in cash; packaged crack, powdered cocaine and marijuana, and a 22-caliber revolver.”

Casey said Porterfield was out on bond for two counts of distribution of MDMA or “molly,” which is pure ecstasy, and two counts of possession of a controlled substance.

Porterfield and Barton now face charges of possession with the intent to distribute a controlled substance (cocaine), first-degree possession of marijuana and possession of drug paraphernalia.

“I want to reiterate that this operation was going on yards away from the playground and going on right next door to the public library,” Casey said.  “Therefore, when we heard he was selling next to the school, we made it a top priority to an end to (Porterfield’s) operation.”