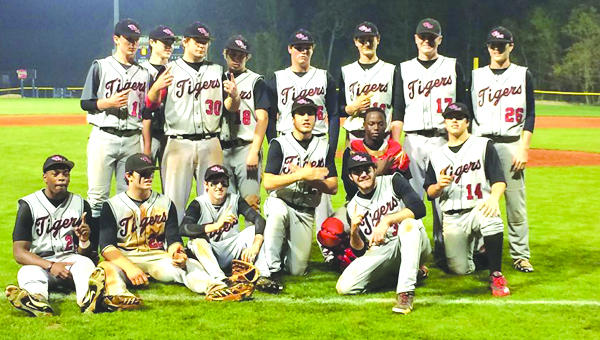 Having already clinched a spot in the class 3A playoffs with Thursday’s win over the Warriors of Cottage Hill, the T.R. Miller Tiger baseball team needed a win over the Warriors Friday to win the area championship.
T.R. Miller did just that as they downed Cottage Hill 3-2 to win the area crown. In the second game of the day, T.R. Miller won 8-3 to finish their regular season with a three-game win streak and a 20-8 record.
The Tigers have won seven of their last eight games after going 3-6 in their previous nine games before the streak began after starting the season 10-1.
The playoff berth for T.R. Miller is their first since 2012. That year T.R. Miller took on Opp and won game one 5-2 before losing game two 6-5 and game three 11-4 to drop the three-game series.
The area championship for T.R. Miller is their first since winning the area crown in 2006.
T.R. Miller will host Excel Friday at 4 and 6 p.m. in the first round of the state playoffs. The series will be a best 2-of-3. If the two teams split Friday, they will play at noon Saturday.
Earlier in the year, the two teams met in Brewton. T.R. Miller won the first game 9-0 over the Panthers before falling 4-3 in the game two for their first loss of the season.
Excel finished as area runner-up to Opp.
With a first round win, T.R. Miller would host Opp or Bayside Academy in round two.

TRM 3-8, CH 2-3
In their two games against Cottage Hill Friday in Mobile, T.R. Miller won game one 3-2 and took game three 8-3.
In game one, T.R. Miller rallied from a 2-1 deficit in the fifth inning with two runs to grab a 3-2 win over the Warriors.
T.R. Miller led Cottage Hill 1-0 after one inning before the Warriors plated one run each in the second and fourth innings to take a 2-1 lead over the Tigers.
Tripp Floyd earned the win on the mound for T.R. Miller as he went the complete game and allowed five hits, two runs, none earned, walked one and struck out eight.
At the plate, Jones Manning and Drew Williamson both had one hit each while Kyle Davis added two and had one RBI. Hunter Brittain added two hits and two RBIs with one hit being a triple.
Zac Griffin and Chris Jones both chipped in one hit in the win for the Tigers.
In game two, T.R. Miller trailed Cottage Hill 2-0 after one inning and 3-1 after the fourth inning before scoring seven unanswered runs to get the five-run win. The Tigers scored four runs in the fifth inning and three in the sixth to get the win.
Brittain pitched T.R. Miller to the win as he went all seven innings and allowed five hits, three runs, two earned, walked three and struck out eight.
At the plate, Manning had one RBI while Davis, Brittain and Griffin all had one hit each. Dominique Jackson had a triple and one RBI while Jo Jo Booker finished with two hits and two RBIs. Caden Lodge added one hit and one RBI while Jones had one RBI in the win.