No tag and bad case of nerves led to the arrest of a Flomaton man on drug charges Monday, while Brewton Police Department wrapped up a sting Tuesday that sent nine to jail and left them still searching for one.
Brandon Burkett, Commander of 21st Circuit Judicial Drug Task Force, said Tuesday that 23-year-old Herbert Adams Jr. was pulled over for not having 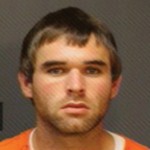