ASCC baseball gets conference win over JDCC Thursday in Brewton 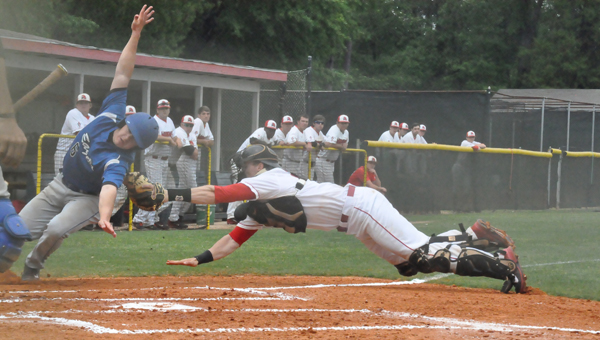 Four runs in the first inning for Alabama Southern—two on bang-bang plays at the plate and an obstruction call—paved the way for a 5-2 conference win for the Eagles of Monroeville over the JDCC baseball team Thursday in Brewton. JDCC also had a costly error in the first inning on a would-be double play that helped lead to a run.
Alabama Southern went on to add one more run in the fourth inning while holding JDCC to one run each in the sixth and eighth innings to get the three-run win. The loss for JDCC dropped the Warhawks to 19-18 overall and to 14-11 in conference play.
Leading the way at the plate for the Warhawks of JDCC in the loss were Jonathan Moore, John-Mark Cosby, Craig Headley and Alex Jones.
Moore had two singles along with Cosby while Headley and Jones both had a double each and one RBI.
Nick Helton was tagged with the loss on the mound as he went the first 4 2/3 innings and allowed nine hits, five runs, two earned, walked three and struck out one.
Tyler Henry went the next 3 1/3 innings and allowed two hits and struck out one.
Dylan Johnson went the final inning and allowed one hit.
The two teams will meet against Saturday in Brewton at noon. The game will be a nine-inning and a seven-inning doubleheader.