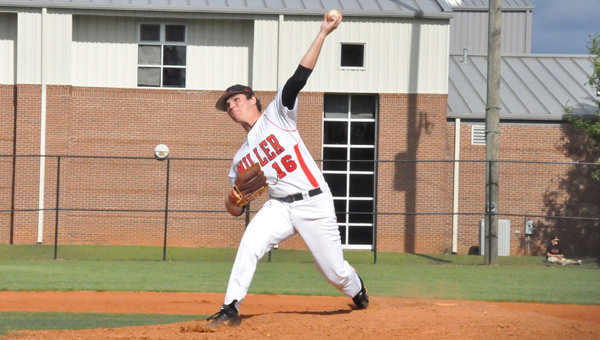 The T.R. Miller Tigers baseball team will square off against the Excel Panthers for the fifth time this season as they will tangle Monday afternoon at 5 p.m. with a spot in the second round of the class 3A state playoffs on the line.
The two teams met Saturday in Brewton—after games were rained out Friday—and split. Excel stunned T.R. Miller in game one as they took down the Tigers and starting pitcher Kyle Davis 10-7 to take an early 1-0 lead in the best-of-three series.
With their season on the brink of ending with a loss in game two, T.R. Miller earned a 3-1 win to even the series and force Monday’s deciding game. With the split, Excel improved to 16-9 while T.R. Miller moved to 21-9.
“In game one we made too many mistakes,” T.R. Miller Tiger head coach Jim Hart said. “We put people on base by hitting them and walking them and made five errors. You are not going in the area and you are not going to win hardly against anybody, much less in the playoffs when you do that. We shot ourselves in the foot. We came back in the end and played hard. That part I was proud of that, but we put ourselves in a hole and just had to scrap right there at the end to get back in it. Game two was a little bit different. We swung it better and did some things. I thought Tripp (Floyd) really pitched well. We will see what happens Monday. That is why they give you two out of three. We will just have to see.”
T.R. Miller defeated Excel earlier in the year in Brewton 9-0 in the first game of a doubleheader before falling in game two 4-3 to the Panthers. The loss to Excel was the first loss of the season for T.R. Miller.
The winner of Monday’s game will play Opp in next week’s second round of the state playoffs. Opp would host Excel in round two or would come to T.R. Miller.
Opp defeated Bayside Academy 8-4 and 5-0 Saturday in their series.
Game time for Monday’s third game of the series will be at 5 p.m. in Brewton. Excel won the coin flip and will be the home team in the deciding game.
The last time T.R. Miller won a first round playoff game was in 2006. That year the Tigers advanced to the state quarterfinals before falling to Montgomery Academy.

Saturday’s game one: Excel 10, TRM 7
Down 10-4 heading into the bottom of the seventh inning in game one Monday, T.R. Miller rallied to cut Excel’s lead to 10-7 but left the bases loaded to suffer the three-run loss.
The two teams were scoreless after two innings of play before Excel scored one run in the third inning and four in the fourth to grab a 5-0 lead over T.R. Miller. The Tigers plated two runs in the bottom of the fourth inning to cut the lead to 5-2. In the fifth, Excel again plated four runs to grab a 9-2 lead over T.R. Miller.
T.R. Miller added two more in the sixth to cut the lead to 9-4. T.R. Miller outscored Excel 3-1 in the seventh inning, but could not get any closer as they took the loss by three.
Davis took the loss on the mound for T.R. Miller as he went five innings and allowed nine hits, nine runs, walked two, hit four and struck out eight.
Ryann Gray went the final two innings and allowed two hits, one run, walked one and struck out two.
At the plate, Jones Manning had a single while Hunter Brittain had a double and a single and two RBIs. Floyd had a double and one RBI while Zac Griffin had a single and one RBI.
Chris Jones chipped in two singles and one RBI while Jo Jo Booker had a single and one RBI and Caden Lodge had a single.

Saturday’s game two: TRM 3, Excel 1
In game two, T.R. Miller benefited from a three-run second inning and Floyd pitched a one-run game to lead the Tigers to a 3-1 lead over Excel.
With all three of T.R. Miller’s runs coming in the second inning, Excel’s lone run came in the fifth.
Floyd went seven innings on the mound and allowed six hits, one earned run, walked three and struck out five.
Drew Williamson had a single and two RBIs while Floyd added a double and Griffin had a single. Booker added a single while Lodge had two singles and one RBI.
T.R. Miller’s runs in the third inning came with two outs in the inning.