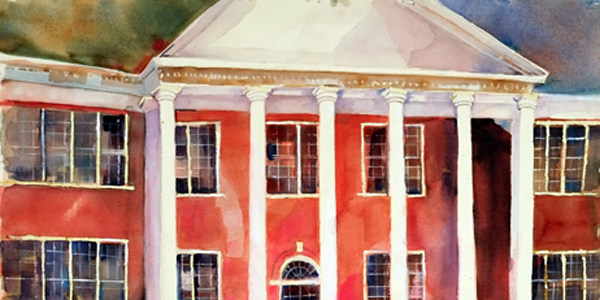 Louise Garrett’s work features landmark locations around Brewton, as well as many other scenes.

The Greater Brewton Foundation will host a reception on Tues., April 29, featuring the works of the late local artist, Louise Garrett.
Garrett is known for her watercolor pieces of local landmarks, as well as other still life works.
“Her work encompasses five general subjects – landscapes, boats, figures, florals and buildings,” said GBF member Stephanie Walker. “The great thing about her work is that it appeals to everyone.”
Thanks to the Garrett family, the foundation is now in possession of more than 300 pieces of art.
“The family donated all of this to us,” Walker said. “We’re calling it the artist’s collection, and all the proceeds of the show and sales online will be used to fund local projects.”
The exhibit and sale will be held at the Jefferson Davis Community College auditorium foyer from 4 p.m. until 7 p.m.
All artwork is priced based on a complete appraisal of the collection that was done by an art appraiser, Walker said.
During the last three years, the foundation is provided more than $70,000 to fund local projects. In 2013, $35,000 was given for projects in eight local schools, at the Brewton Public Library, Meals on Wheels, reading programs and various non-profits.
“We’ve helped to fund food projects like Carlisa Inc. and the First United Methodist Church food pantry,” Walker said. “We’ve also given money to the city’s fire and rescue and volunteer fire department.”
The foundation relies on public support annually and income that is generated from the endowment.
“We’re a public foundation,” Walker said. “That means that we can’t survive on investment income alone. We have to have contributions – which is why we have events like this artist exhibit and sale, but we also love it when people in our community give so generously to us.”
Contributions may be mailed to the Greater Brewton Foundation, P.O. Box 87, Brewton, AL 36427.