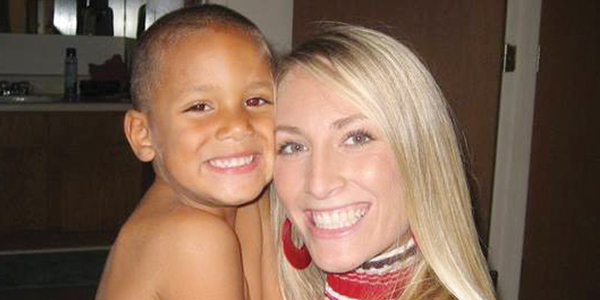 Stephanie Smith and her son, Devin.

Now, the public is being asked to lend a helping hand in her recovery.

Stephanie Smith, her 10-year-old son, Devin, and friends were enjoying a

weekend at the beach when she jumped off the boat to “cool off.” She

struggled to resurface, prompting a rescue from the water. She was

conscious when pulled onto the boat; however, she is now in a coma at South Baldwin Regional Medical Center in Foley.

It’s been reported that Smith suffered cardiac arrest and was without oxygen for an extended period of time. Smith also suffered from Graves Disease, which family believes impacted her ability to swim.

“Stephanie has been very sick for about a year,” family wrote on the fundraising site, www.youcaring.com. “ She was in the current and was not aware that her muscles had (been) affected by her condition.

“She panicked and swallowed lot of water, and when she was pulled on to the boat, she collapsed and went into cardiac arrest,” the description read. “Her friend started CPR, and they finally got to the shore and then in the ambulance. She was down for a while, but they put her on life support.

Smith was removed from life support over the weekend, and now, her family will now be faced with numerous medical bills. Smith apparently started working only two months ago and her health insurance has not taken effect. The family has set up an account at www.youcaring.com to raise money for her medical bills. One can donate under the name Stephanie J Smith.

The Brewton Standard will update this story as more details become available.