Located in the former New Orleans Po Boy location, the site is the second location for Angela Rivals and her husband. The couple currently owns a restaurant of the same name in Atmore.

At Monday’s city council meeting, Rivals was awarded a transfer of the liquor license – the last major hurdle before opening for business. 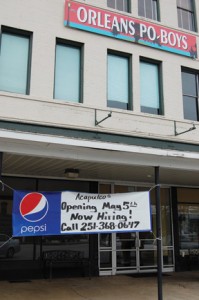 Acapulco’s will open May 5.

“We’ve got several friends from Brewton, who were always encouraging us to open a restaurant here,” Rivals said as one of the reasons for the opening. “They said, ‘Come on. Do it so we don’t have to drive over to Atmore.’

“Plus, it was a great opportunity,” she said. “My husband has wanted to expand for a while, and this is a great location.”

Rivals said the building, which is “older,” needed a bit of remodeling before the couple could proceed with their latest venture.

“But we’re done, and we’re very excited to say that we will open for business on May 5,” she said.

“And don’t think that we only have Mexican food,” Rivals said. In fact, as the meeting concluded Monday, Connie Baggett, the city’s program development director, remarked about the restaurant’s steak.

“We do have a great steak,” Rivals said. “We’ve traditional American food, too – hot dogs, hamburgers, hot wings, you name it. There’s something to make everyone happy.”