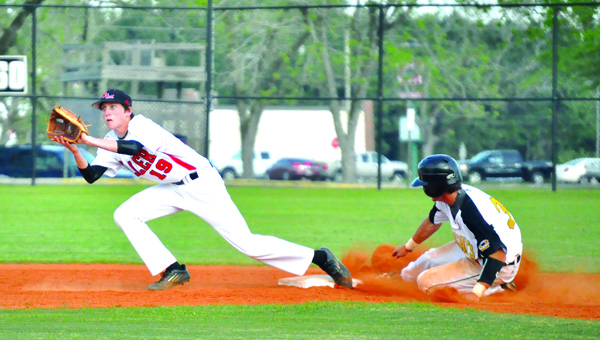 T.R. Miller’s Jones Mannings awaits a throw at second base against Opp in Friday’s second round playoff series. The Tigers were swept by the Bobcats 2-0 to see their season come to an end. Opp won game one 11-8 and took game two 6-2.

The Opp Bobcats earned a sweep of the T.R. Miller Tigers Friday night in Brewton in the class 3A second round of the state baseball playoffs to continue their journey on for a quest of the 3A crown.
Opp rallied in game one two defeat the Tigers 11-8 and earned a 6-2 win in game two.
T.R. Miller head coach Jim Hart said his team made too many mistakes in the two games.
“We just made too many mistakes,” Hart said. “We had too many in the first ballgame and put too many people on base and left too many people on base. That cost us in the end and in this ballgame right here. Tripp (Floyd) bowed his tail up and pitched there for us, but in the end we let them do some things and we made some mistakes and it cost us. I am proud of the kids now. They battled and they played hard all year long. I am proud of their effort. I wished we would have played better in these two ballgames.
“ I would have liked to have seen what we could have done.”
Hart said Opp is a good team.
“But my hat is off to Opp,” he said. “They have a good team and they played hard. They capitalized when we did make mistakes.”
Although his team saw their season come to an end, Hart said he was proud of his seniors on the team.
“They didn’t have very much experience,” he said. “They did every single thing that we asked them to do on offense and defense. They made themselves better baseball players and they played hard every single day. They played hard, did the running and never missed a day in the weight room. They did the whole nine yards. I am as proud of them as I have ever been of a bunch of seniors.”
The wins for the Bobcats moved them to 25-8 overall while T.R. Miller ended their season with a 22-11 record.
Opp will now take on Sipsey Valley in the state quarterfinals.

Game one:
Opp 11, TRM 8
The Opp Bobcats rallied from a 7-2 deficit in the third inning and an 8-7 in the sixth inning to defeat the T.R. Miller Tigers 11-8 in game one Friday night in Brewton.
Down by five in the third, Opp scored five in the inning to tie the game. After the Tigers of TRM took an 8-7 lead in the bottom of fifth on a Bobcat error, Opp played four of their own in the top of the sixth on two TRM errors to grab an 11-8 lead. The three-run lead would stand for Opp as they took a 1-0 lead in the best of three series.
Opp improved to 24-8 and T.R. Miller fell to 22-10.
For TRM, Drew Williamson took the loss on the mound. Kyle Davis started the game and went 2 2/3 innings. Ryann Gray pitched 2 1/3 in relief of Davis.
Davis allowed one hit, seven runs, three earned, walked seven, struck out three and hit one.
Gray allowed one hit, no runs, walked two and struck out one.
Williamson allowed two hits, four runs, one earned, walked and struck out one while hitting two.
Davis had a double at the plate while Tripp Floyd had two singles and Zac Griffin had one.
Tim McDonald had a three-RBI triple in the second inning. TRM scored three runs in the second to take a 7-2 lead.
Jo Jo Booker and Caden Lodge both had a single with Lodge having one RBI.
TRM led Opp 4-1 after the first inning and 7-2 after two. Opp tied the game up at 7-all in the third inning with five runs on two hits and one TRM error.
TRM added one in the fifth inning, but Opp’s four-run sixth propelled them to the win.
Game two: Opp 6, TRM 2
In a pitcher’s duel through five innings, that saw the game tied at 1-1, Opp scored five runs in the bottom of the sixth and held T.R. Miller to a late run in the seventh inning to get a 6-2 win and a sweep. The runs came on three hits and two T.R. Miller errors.
The two teams were scoreless after two innings before both plated one run each in the third inning.
For T.R. Miller, Tripp Floyd took the loss on the mound as he went 5 1/3 innings and allowed five hits, five runs, one earned, walked and struck out six while hitting one.
Tim McDonald went the final 2/3 of an inning and allowed two hits and one run.
Opp had only three hits going into the sixth inning.
Drew Williamson led T.R. Miller with three singles while Hunter Brittain had a single and a double.
Zac Griffin had a single and one RBI while McDonald had two singles.