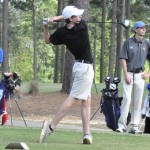 Will Smith tees off at a home match for T.R. Miller.

Playing at sectionals Monday in Montgomery, the T.R. Miller golf team struggled on the back 9 to place fifth out of five teams.
The Tigers shot a total score of 370 while Bayside Academy led with a 304 followed by Trinity’s 316, Straughn’s 342, Opp’s 344 and T.R. Miller.
Will Smith advanced to sub-state as he shot an 85 to lead T.R. Miller in the No. 1s play.
Troy Hart shot a 91 while Chandler Brown shot a 109. Yancey Jernigan shot a 101 while Tylan McDonald shot a 93.