WSN takes down FHS while TRM falls in extra innings 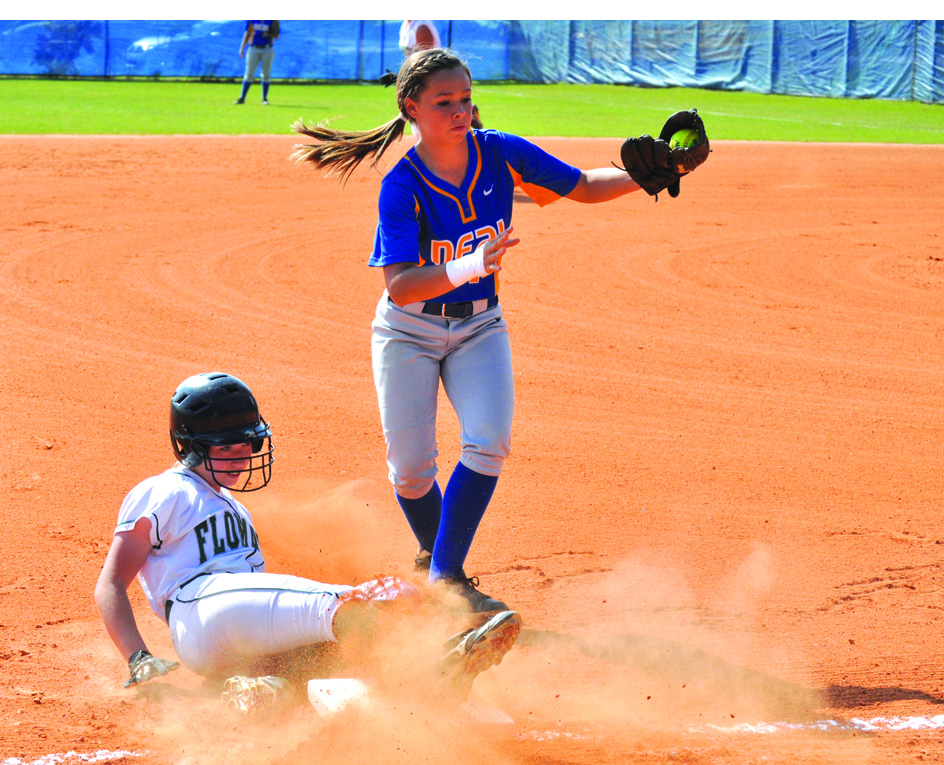 Adam Robinson | The Brewton Standard
W.S. Neal’s Karissa Johnson fields a throw at third base while a Flomaton player slides in safely.

Down 3-0 after three innings to Flomaton Thursday at home on Senior Day, the W.S. Neal Lady Eagle softball team scored two runs in the fifth innings and five in the sixth to rally and get a 7-3 win over the Lady Canes.
The win finished the regular season for W.S. Neal with a 16-12 record.
Haleigh Dubose was the winning pitcher for the Lady Eagles. Dubose went seven innings and allowed three hits, three runs, two earned, walked three, struck out six, and hit four batters.
At the plate for the Lady Eagles Madison Winchester had a single and two RBIs while Dubose had a single. Jasmine Crook finished with a double while Karissa Johnson had a single.
KeKe Floyd had two singles and two RBIs for the Lady Eagles.
W.S. Neal’s two runs in the fifth inning came on a Flomaton throwing error. In the sixth inning, W.S. Neal scored five runs on another Flomaton error and four hits.
Floyd and Winchester both had a two-RBI single in the sixth inning while Crooks double aided in the inning.
Florala 5, WSN 4
In a back-and-forth game between the W.S. Neal Lady Eagles softball team and Florala Tuesday in Florala, the Lady Wildcats edged out the Lady Eagles 5-4 in extra innings.
Florala led W.S. Neal 1-0 after two innings and 2-0 after three innings. From there, W.S. Neal plated one run each in the fourth and one in the seventh inning to tie the game up and force extra innings.
In the eighth inning, both teams scored two runs each to see a 4-all tie and force an extra inning.
In the ninth inning, Florala held W.S. Neal scoreless and added one run in the bottom of the inning to get the win by one run.
Both teams had six hits in the nine-inning game while W.S. Neal had six errors and Florala had only one.
Haleigh Dubose was the pitcher of record for the Lady Eagles of East Brewton. Dubose went eight innings and allowed six hits, five runs, two earned, walked five and struck out nine.
At the plate for W.S. Neal, Dubose, KeKe Floyd, Christina Robinson and Tiffany Sawyer all had one hit each while Tori Wyatt had two.
Dubose and Floyd both had a triple each while Wyatt and Sawyer had a double each. Dubose had two RBIs in the loss while Robinson had one.
With the loss W.S. Neal’s overall record fell to 15-12 this season.
Flomaton 13, TRM 7
After rallying with five unanswered runs to tie the game at 5-all and force extra innings, the T.R. Miller softball team gave up six runs in the 10th inning and lost to Flomaton by a score of 13-7 in 10 innings Tuesday at home.
The Lady Hurricanes led T.R. Miller 1-0 after one inning of play and 5-0 after two innings after scoring four runs in the second inning.
T.R. Miller made the game close with four runs in the third inning and one in the fifth to tie the game.
After no team scored in the remainder of the game, the game went into extra innings tied at 5-all.
Neither team scored in the eighth inning, but Flomaton and T.R. Miller both scored two runs each in the ninth inning to see the game get tied at 7-all and head to the 10th inning.
Lady Tiger Krystal Bell drove in Madison Douglas and Myra Reiss with two outs in the inning to force the 10th inning.
In the 10th frame, Flomaton outscored T.R. Miller 6-0 to get the win by six.
T.R. Miller made three errors in the top of the 10th inning to help Flomaton get six runs in the inning and eventually take the loss.
At the plate for the T.R. Miller Lady Tigers, Madison Douglas had a single and one RBI while Steely Ruzic had two singles. Mallori Floyd added a single while Myra Reiss had a double and a single and one RBI.
Krystal Bell had a single and two RBIs in the ninth inning while Abbi Roberts had two singles and a double.
Moriah Brundidge added a triple and a single and one RBI.
Taylor Austin was the pitcher of record for the Lady Tigers.
Flomaton is coached by former T.R. Miller softball player and assistant coach Terri Lynne Peacock.
T.R. Miller fell to 16-8 overall with the loss Tuesday.