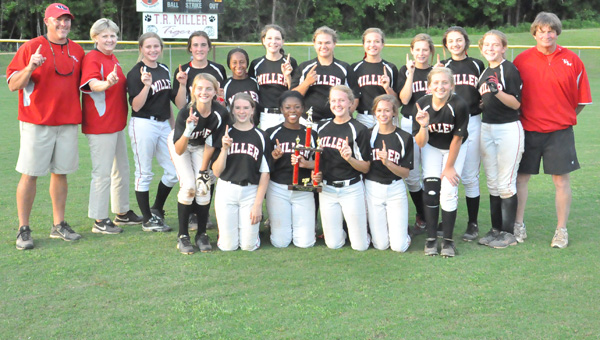 The Lady Tigers went 3-0 on the day taking down Bayside Academy 15-2 in game one, W.S. Neal 7-4 in game two and winning 3-2 over Cottage Hill. Krystal Bell had the game-winning hit and RBI for T.R. Miller.

The win for T.R. Miller sends them to the South Regionals in Gulf Shores next week. T.R. Miller will play at 5 p.m. Friday.

W.S. Neal went 1-2 Thursday and finished third in the tourney. The Lady Eagles opened with a 3-0 win over Cottage Hill before falling to T.R. Miller and Cottage Hill in a rematch by a score of 4-1.

Cottage Hill finished as the tourney runner-up and will join T.R. Miller in Gulf Shores. The Lady Warriors went 2-2 in the tournament. Bayside Academy finished fourth with an 0-2 record.

Please see Wednesday’s edition of the Brewton Standard for a complete tourney recap along with quotes from both T.R. Miller and W.S. Neal’s coaches and T.R. Miller’s Bell along with pictures from the event.

The tournament title was T.R. Miller’s first since 2010.